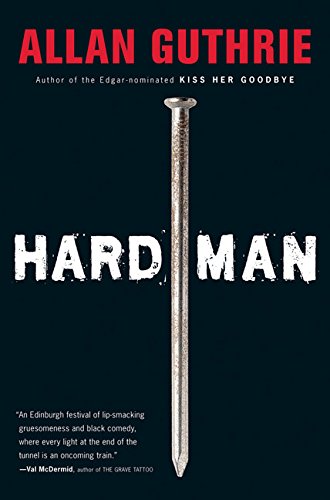 Hard Man is the story of Gordon Pearce, an ex-con, refusing a job for a bumbling family named the Baxters--father Jacob, sons Rog and Flash, and pregnant 16-year old daughter May. The Baxters need protection from Wallace, May's estranged husband. Wallace is an office worker with huge glasses that magnify his eyes; yet he's a dangerous man with a history of violence. Wallace and Pearse are both "hard men," and the events of the story lead them to an unforgettable confrontation.

I truly enjoyed Hard Man. Guthrie is a master of his craft. I was constantly trying to figure out who's good, who's bad, who's justified in what they are doing, and throughout the story I was worrying that someone would kill a male dog named Hilda.

As to what might happen next at any given point, I couldn't even guess, just waited in suspense.

Guthrie narrates in third person, and, while focusing on Pearse, the seeming protagonist, Guthrie shifts perspective from character to character—and the shifting heightens the suspense as the story races to its conclusion.

Just as you’re wondering if one character will be knocked off, you’re swept back to another character you had been worrying about.

When you read this book, keep your eyes open. Look for farce (Jacobean, no less) and even strong allusions to Monty Python. And some of the things you are taking most seriously are actually meant to be ludicrous—on one level—maybe.

So this is perhaps where enjoyment of the book becomes a matter of taste. You will need a well-honed sense of the farcical and ludicrous (as well as a taste for a blatant Python reference) to truly enjoy this otherwise serious thriller.

To my taste, the combination of the dead serious (and I do mean dead) with the ludicrous makes the book that much more fun.

Plus, Yank that I am, I learned some new words, like plonker and that to clock someone has a different meaning over there. Seems to mean to tail, or follow, someone.

Can’t wait to read my next Guthrie book.