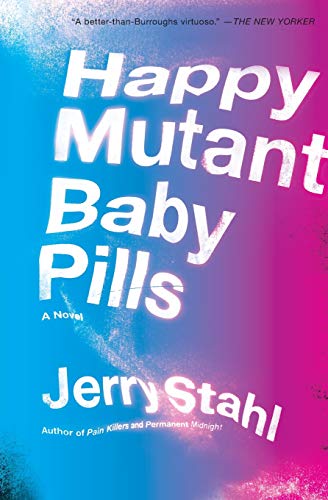 “. . . a comical descent into the carefully choreographed madness of contemporary American culture.”

Lloyd has a job writing copy about the side effects for prescription drugs. He has a great talent for it as well as a mean smack habit. Happy Mutant Baby Pills by Jerry Stahl tells the story of Lloyd's rise and fall.

After getting caught shooting up heroin in the bathroom of his son's school, he does some hard time and then is rehabilitated writing copy for a Tulsa-based online dating service called Christian Swingles. “This was the dawn of online dating. So I wasn't cranking out my usual side effects, pharma-copy, gold scams, or sex toy banter. Christian Swingles was weirder. At least for me.”

Mr. Stahl is a novelist and screenwriter known for his memoir Permanent Midnight and his addiction to heroin. Earlier this year, Mr. Stahl edited The Heroin Chronicles (from Akashic Books), where he contributed a short story that became the Prologue for Happy Mutant Baby Pills.

Following a botched heist at a Tulsa pharmacy, Lloyd takes this as an opportunity to leave town. He takes a Greyhound bus headed toward Los Angeles and meets Nora, a woman with absurd breast implants and emotional issues. Lloyd ends up falling in love with her, kickstarting a series of misadventures and moral compromises.

While Lloyd is a cynical ad man, Nora radiates a dark vengefulness. She keeps talking about getting back at a man who wronged her. After settling down in Los Angeles, the pair hang around with members of the burgeoning Occupy movement.

Lloyd tries to find gainful employment, eventually landing a job as a writer for CSI: Las Vegas. The job involves dreaming up demented scenarios for murdering people—his background writing side effects for prescription drugs comes in handy. He also finds out Nora is pregnant, possibly with his child.

Lloyd’s attraction to Nora is an unhealthy combination of lust and fear. Her initial appearance and political stance seems akin to that of a latter-day hippie, subjecting Lloyd to tirades against corporate malfeasance, pollution, and corruption. But her alleged love for mankind does not prevent her from torturing a cop and huffing pillowcases doused in Rust-Oleum.

Her plan, as she relates it to Lloyd, is to give birth a mutant baby, the embodiment of everything toxic and foul she's putting into her body. Lloyd reluctantly concedes to her wishes. But by the time the novel ends, it is with a heartbreaking twist that is both emotionally devastating and darkly comical.

Mr. Stahl writes with a ruthless intensity, words popping from the page, his story set in a neon-lit moral purgatory straight out of a Jim Thompson novel. But the comedy, also dark and bleak, is reminiscent of the propulsive energy of Louis-Ferdinand Celine.

Happy Mutant Baby Pills is a desolate portrait of modern American mores and obsessions. The desire to stay healthy runs alongside the popularity of grotesque police procedurals like CSI.

While the ad copy for prescription drugs becomes more and more euphemized to disassociate the drugs from the bodies they effect, television and movie audiences get more and more jaded. Viewers need to be shocked from their torpor and malaise.

Is it any wonder a former drug addict would understand how the diseased heart of American culture beats? Happy Mutant Baby Pills is a wild ride, a comical descent into the carefully choreographed madness of contemporary American culture.