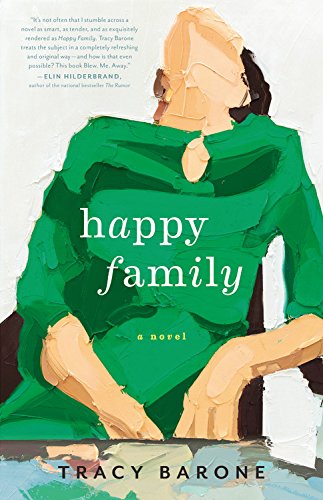 As a veteran movie and television producer, Tracy Barone knows how to tell a story on screens. Her debut novel Happy Family proves that she can also steer an engrossing plot in print.

Moreover, Barone has created a wonderfully unique and complex main character in the person of Cheri Matzner, a former New York City cop, now a professor of comparative religion, whose main features include multiple body piercings, membership in the National Rifle Association, and a recurring addiction to painkillers. At age 40, Cheri is still rebelling against her overprotective mother, even as she fitfully tries to become pregnant herself.

Unfortunately, the narrative ride is repeatedly rocked by annoying cliché bumps—clichés of plot as well as character.

The novel primarily travels along two paths. The backstory traces how Cheri was abandoned by her drug-addicted birth mother and adopted by Sol Matzner, a New Jersey radiologist who later makes a fortune in pharmaceutical coatings, and his Italian-born wife, Cici.

The second plotline focuses on Cheri’s current-day crises, including a bias charge that threatens her university career, her unsuccessful fertility efforts, and her floundering marriage to Michael, a once-promising filmmaker who hasn’t made a new film in years.

Even this brief summary hints at the mix of narrative freshness and “been-there-befores.” Cheri’s relationship with Sol has interesting twists and turns. But it’s become almost a requirement for fictional tenure for a professor to be accused of bias for giving a poor grade to a student who is the offspring of a big donor. And in the not-again column, don’t forget the sassy but big-hearted best friend.

The worst cliché of all is Cici, a spoiled rich wife and risotto-cooking mama who, even after more than four decades in the U.S., still talks like an Italian cartoon. In one of her typical and constant phone calls to Cheri, Cici kvetches that “the pug, he have diarrhea, on the Persian rug in the hallway. And Gristedes on Park, they no want to deliver, it is impossible, they deliver for fifteen years and now they say no?”

By contrast, Barone does a beautiful job of portraying the complexities of Cheri and Michael’s marriage. After half a book’s worth of tension and anger, the relationship is redeemed and explained with surprising moments of underwritten tenderness. “His lips graze hers and they hug. She holds onto him for longer than both of them know is good.”

In the last third of the book, both the strengths and weaknesses are amplified.

Cici’s and Cheri’s relationship deepens, and Barone writes of the particulars of death with penetrating starkness.

On the other hand, she abruptly inserts a handful of therapy sessions in which the counselor conveniently explains all of Cheri’s motivations in long monologues. Then the author neatly ties up every loose end—including some she had never bothered to suggest in the first place.

For all of its flaws, Happy Family is mostly a pleasurable read with language that flows smoothly (if not memorably) and a plot that will keep viewers tuning in to the next episode—oops!—readers turning the next page.