Happy Are the Happy 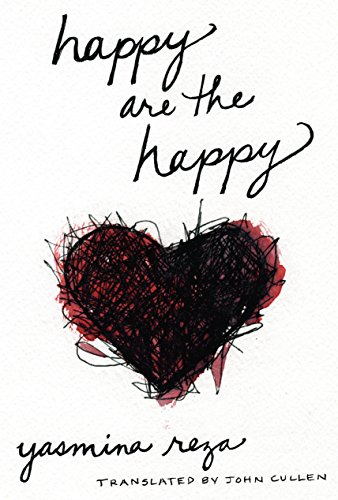 “Happy Are the Happy is a well-crafted and intelligent series of short stories by an author who is more interested in dark than light.”

The focus of American and European storytellers might be moving in opposite directions. On one side of the Atlantic, most American storytellers build their stories around a “big event” that propels the story forward. While there are exceptions to this generalization, even the most critically acclaimed American writers of today, such as Jeffrey Eugenides, Don Delillo, and Richard Ford, rely on a big event or obvious climax in their books.

Stieg Larsson and a few blockbuster “thriller” authors aside, contemporary European storytellers are increasingly drawn to “non-event” stories about the highs and lows of ordinary people within their everyday life. The French author/playwright Yasmina Reza, in her new anthology, Happy Are the Happy, continues this trend toward small topics.

The title of the collection is drawn from a line in a poem by Jorge Louis Borges. From this, Ms. Reza brings forward 20 short-story chapters built around recurring characters who are unhappy, and tussling with internal dilemma. While the story plots are “small,” the characters go about their everyday lives considering big topics: family, life, love, and death.

There is subtle humor and slight pessimism in Ms. Reza’s narrative.  One character, for example, spends several pages wondering what should become of his body when he’s dead. He ultimately abdicates the decision to those who will survive him. In another story, two characters argue about spoiled, indolent children while deciding what cheese to buy in a supermarket.

These and other stories cast a perceptive light on everyday foibles in a manner not too far from the comic sensibilities of Seinfeld, though Ms. Reza’s Seinfeldian observations are more complex and less comic. And like Seinfeld, the characters in Happy Are the Happy are neither heroes nor villains. They do not improve themselves or others.

Indeed, the married characters of Happy Are the Happy pursue extramarital affairs that bring them no pleasure; couples attend parties that neither enjoy. The biting monologs of Ms. Reza’s characters are depressing in their judgments about us and even while amusing in their ability to lampoon our petty motivations.

While there’s much to admire in Ms. Reza’s work, there also may be a little meanness to it. It is easy to imagine that Ms. Reza is skewering real people who have annoyed her in these stories. Some readers may be put off by the lack of a silver lining in most of her stories, while others might want more action and less ennui.

In total, Happy Are the Happy is a well-crafted and intelligent series of short stories by an author who is more interested in dark than light.