Hans My Hedgehog: A Tale from the Brothers Grimm 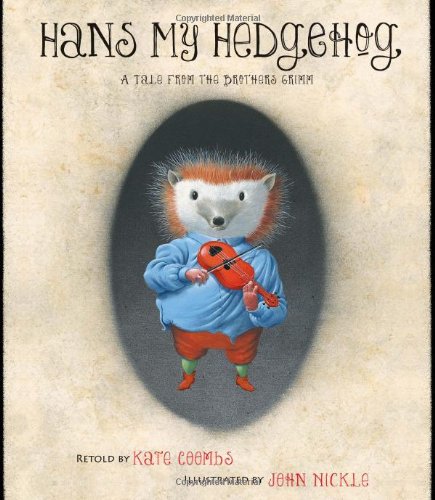 “While some purists might object to the many liberties Ms. Coombs takes in her retelling, most readers will rejoice at this lilting transformation of a too-grim tale.”

Once a hedgehog always a hedgehog? Surely such a thought is unfit for a fairy tale. Kate Coombs has taken a bloody old tale of a neglected half-boy and tuned it up, enchanting more children than the overlooked version tucked away in unabridged collections of Grimms’ folktales.

From the book’s large cover, our quirky protagonist stands to pique a reader’s interest, with his rumpled sky-blue shirt, pointy-toed red shoes and pink paws holding a tomato-red fiddle with a heart-shaped hole in its middle. Like the author, the illustrator pays respect to fairy-tale conventions, with his use of rich colors, fine details, and intelligent black silhouettes. And in highlighting the characters’ often impish expressions and their energy (soaring roosters! dancing pigs!) he amplifies this adaptation’s humorous, cheerful approach.

Both the new and old story begin with a lonely couple with such an irrational longing for a child that the father foolishly says he’d want a son even if he were half a hedgehog.

Of course the preposterous becomes real, and the wife gives birth to a prickly baby who’s a boy only from the waist down. In Ms. Coombs’ tale, the loving parents nurture the little one they name Hans My Hedgehog, in contrast to the dark old tale that describes the cold-hearted couple leaving him alone in a corner.
As the son grows older, he asks his father for a musical instrument. His father brings him a shiny little fiddle (changed from bagpipes in the original), which he plays so well in time he provides the music at the village fairs. As no local girl deigns to pay him any mind, though, the young half-man despairs and decides to leave home.
As in so many fairy tales, the protagonist enters the mysterious forest to meet his destiny. Fiddle in paw, Hans My Hedgehog arrives astraddle a hefty rooster, with his plump pigs trailing them. Three times, people enter the wood, lose their way, and ask Hans to help them leave. Our plucky hero tells the two kings he will assist them on one condition: “If you give me the first thing that meets you when you reach your palace.”

Fairy tale aficionados will foresee the consequences of the king’s rash acceptance of such a demand. In each case, it is the king’s own daughter that first greets her father. The two princesses differ in their response, with the first rejecting such a suitor and assisting her father in trying to cheat Hans from his reward. The second princess agrees to marry the odd creature who has helped her father.

While fairy tales typically provide us with the satisfaction of a clearcut sense of justice, the stark consequences of people’s deeds sometimes veer into gratuitous violence. In the Grimms’ version, the hedgehog arrives to claim the first princess and leaves with her, punishing her deceit by pricking her so much she bleeds, before he abandons her. Ms. Coombs, however, eschews such gore and simply shows Hans rejecting the undeserving bride.

Ms. Coombs also delivers a welcome upbeat conclusion, as Hans My Hedgehog plays so magically at his own wedding reception that the spell is broken, and his fair bride is rewarded with a handsome young man with red, spiky hair and a loving smile. No doubt the couple will find it much easier to waltz (or twist) the night away.

While some purists might object to the many liberties Ms. Coombs takes in her retelling, most readers will rejoice at this lilting transformation of a too-grim tale.