Hans Sturm: A Soldier’s Odyssey on the Eastern Front 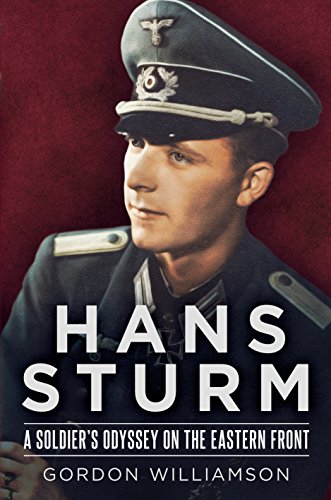 When it comes to history, first-hand accounts of participants’ experiences, especially in combat, are the gold standard. In the case of those rank and file German soldiers who served on the Eastern Front and managed to survive, they are even more rare and desirable.

Now that many memoirs of the famous and infamous generals and other leading lights of the conflict have been given their due, author Gordon Williamson has added another book length study to his long list of World War II publications. It is the story of one of the relatively few German enlisted men who was awarded the Ritterkreuz or Knight’s Cross, a decoration somewhat comparable to the Medal of Honor, in addition to other prestigious decorations.

What makes this story even more remarkable is the fact that the subject, Hans Sturm, was not your everyday, “I was just following orders” German soldier. Indeed, he was a courageous, lead from the front warrior who also believed in justice, compassion, and doing the right thing, even when it ran counter to Nazi Party policy or German military command. Some examples are cited in the text.

Although the author provides some biographical information on Sturm’s early life, this is an account of his military service, most prominently on the Eastern Front. It is this part of the book which gets the lion’s share of detailed coverage, particularly his heroic actions against the Soviets as a machine gunner and bonding with his comrades.

However, the book’s subtitle is somewhat misleading in that he also spent considerable time in training at various locations, giving morale boosting speeches at factories and in communities after receiving his Knight’s Cross, recuperating after being wounded in action, and serving against partisans in Italy later in the war.

After attaining junior officer’s rank, his final service was in the Battle of Berlin where he was captured by the Soviets. Sturm then spent eight years in a Soviet labor camp, covered in the final chapter, before returning to Germany upon release to finally reunite with his wife and the son that he had never seen.

Sturm’s military training carried over into a career as an engineer in postwar democratic Germany before his retirement in 1979. He died in 2004 but not before providing much of the information in the book to the author.

The format of this book is unusual in that, rather than a straightforward detailed account of his military service, it also contains much in the way of personal experiences and dialogue which add much more in the way of context regarding the person who was Hans Sturm and the bonds which form among fellow warriors under fire.

Although a number of the chapters are not terribly long, they essentially represent stages of his service, from combat actions and training to speech giving and time spent in the hospital, recuperating from several wounds suffered as well as severe frostbite over the course of four years.

Unfortunately, there is no index for reference and no maps, which would seem to have been somewhat of an oversight as the specific locations of his service would have been helpful to the reader. Otherwise, there is little to criticize besides some typos and an occasional word missing from the text.

Creditably, there are many photographs interspersed through the book along with an additional photographic section following the end of the text.

Inasmuch as this is a memoir, there is no bibliography and, consequently, no notes as such, with the exception of some chapter-specific explanatory notes which helpfully define unfamiliar German words or terms. They also clarify, identify, and contextualize certain other references in the text.

There are two appendices. The first provides thumbnail descriptions of the history of the two infantry divisions in which Sturm served, and the other has photographs and descriptions of the awards and decorations which Sturm received, including the Anti-Partisan Badge which he adamantly refused to wear, following such service in Italy.

Besides being the memoir of a surviving German soldier who served on the Eastern Front, the book also demonstrates that, as a veteran of the maelstrom of war, one can maintain some humanity and sense of justice, fair play and, yes, even a sense of humor. Sturm did just that, setting an example for all.