The Hangman's Secret: A Victorian Mystery 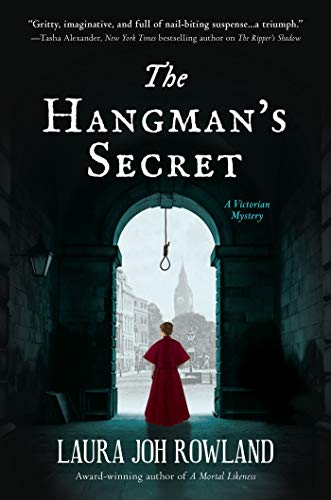 “the story holds water and reads well from beginning to end.”

The Hangman’s Secret, a Victorian Mystery by Laura Joh Rowland, is initially a slow read, primarily because she chose first person present tense as her point of view, and that gives the writing a staccato, clunky feel: ”A loud rapping on my window awakens me. A yellow glow from the street lamp penetrates the curtains. The clock says 6:35. I crawl from beneath the quilts and totter . . .”

The story has potential, but at times seems to redirect itself. The heroine, Sarah Bain, is a photographer, (a woman in a man’s world). In Victorian England Sarah and her two cohorts, Lord Hugh Staunton and street urchin Mick O’Reilly, are employed by Sir Gerald Mariner, a wealthy businessman who owns the Daily World newspaper.

As the story opens, Sir Gerald directs Sarah to take her photography equipment and go to the scene of a crime. One Harry Warbrick, the owner of a local pub, has been murdered by hanging. The murderer, in an attempt to create a suicide scene, has flubbed the job, and Harry is decapitated.

In an ironic twist, Sarah discovers that Harry was also a hangman employed by the government to take care of those unpleasant situations. As Sarah, Hugh, and Mick take their photographs for the Daily World, they begin to uncover information that proves the death was murder, not suicide.

When Sir Gerald is informed of this, he challenges the local police to a contest—who will discover the true perpetrator of this ghastly crime first?

Much to Sarah’s chagrin, this puts her at odds with her lover, Police Constable Barrett.

As Sarah, et al follow the clues laid out before them, they begin to see a connection between Harry’s death and the execution of one Amelia Carlisle. Amelia was guilty of killing babies left in her care, and Harry was her executioner. The more Sarah digs into this relationship, the more apparent it becomes that somehow Harry’s death relates to Amelia’s.

Sarah, Hugh, and Mick focus on the seven witnesses who viewed Amelia’s execution, and as they tighten their investigation, a second murder occurs: the assistant hangman dies in an explosion at this home.

Rowland peppers the book with small side trips that prove to be rather interesting and important to the story. Lord Hugh Staunton is gay, and in Victorian England, this is absolutely not acceptable. His family disowns him, and his secret is out. His lover is none other than the son of Sir Gerald Mariner.

Mick O’Reilly is infatuated with a budding stage star who happens to be having an affair with Sheriff Hargreaves, a high-powered mayoral candidate who is also on the list of suspects. Mick is determined to prove the sheriff guilty, whether he is or not.

Two trips to Newgate prison to interview suspects, a lie that almost proves the undoing of Sarah and her team, and a chase through the seedy underside of London—are well presented with high tension and conflict.

Rowland ties up these loose ends and leaves nothing undone . . . except . . . while all this is going on, Sarah takes on another task: to find her father who abandoned her and her mother when she was just a child. The primary suspect in the murder of a young girl, he took off and disappeared in a cloud of dust. This is a diversion from the primary story, and it becomes apparent only at the end that this is Rowland’s way of setting up the next book.

There are times when one does not care for Rowland’s characters. Sarah, insisting that she loves Constable Barrett, finds it quite easy to work against him and fault him for doing to her exactly what she is doing to him.

There are times when Sarah is overly emotional and perhaps irrational in her desire to prove her beliefs. “Plagued by regrets, I wonder if he really is trying to help my father. But I can’t shake my conviction that I mustn’t betray my father to a policeman who’s duty-bound to act according to the law . . .” This is a father who abandoned her and her mother, married another woman and started a new family, and is wanted in connection with the murder of a little girl. One must question Sarah’s true loyalty.

Mick and Hugh, although they play an important part in the story, are rather flat characters. Mick is whiny about his love for the stage beauty; Hugh’s homosexuality is treated as if, in Victorian England, sodomy is like a bad case of acne.

Having said that, and in spite of the rather staccato narrative, the story itself holds water and reads well from beginning to end.