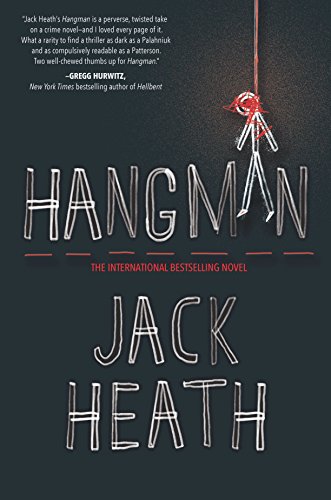 “This novel contains perhaps one of the most unique characters of the mystery-thriller genre.”

Timothy Blake is a cannibal. He admits it. It isn’t something he particularly likes. In fact, he fights against it, but eventually he gives in to the craving that has been with him since the day as an infant he survived the gunning down of his parents and was left alone with two corpses for several days before the police discovered the bodies—or what was left of them.

“I never tell people what happened to my parents. I don’t discuss my eating habits. I can never forget how vulnerable I am—if anyone guessed I was a cannibal, they wouldn’t have much trouble proving it. The only thing keeping me from death row is that I haven’t given anyone reason to suspect me.”

When he isn’t being paid to solve riddles people send him or prove how fast he can work a Rubik’s Cube, Timothy is a civilian consultant for the Houston division of the FBI. He got the job with the aid of Director, Peter Luzhin, in a kind of unilateral blackmail. Timothy helps out on cases and neither tells what he knows about the other’s dark secrets. If either ever talks, one will be kicked out of the FBI and the other will no doubt end up in a hospital for the criminally insane or serving a life sentence.

One perk of working for Luzhin: Timothy gets those recently executed instead of a paycheck.

“‘I saw you eating raw meat. I wondered if you wanted more.’

‘How?’ I sound more desperate than I intend.

‘It’s like playing hangman, but in reverse. When you solve the puzzle, you get the guy on the gallows.’”

Currently, they’re working on the case of a kidnapped teen. “Cameron Hall, fourteen years old, last seen at four o’clock yesterday afternoon.” The case turns out not to be so straightforward, eventually become more twisted than a corkscrew, but it’s nothing compared to what Timothy’s now going through in his private life.

Learning the FBI Field Agent on the case is a childhood acquaintance who grew up in the same orphanage as he, Timothy realizes they have a connection because both escaped death as children. He’s beginning to have kind feelings toward Agent Reese Thistle but doesn’t dare let down his guard or get close to her. Some appetites are easier to control than others.

It’s just a matter of time before Timothy solves the case but there’s a chance his own secret will be revealed in the process when evidence is found linking him to the kidnapping.

“If it had been me in the back of a car as it went over a bridge, and her suckling at her dead mother’s breast, would she be the cannibal and me the FBI agent? Who am I? Who is she?”

There are some hard decisions to be made if Timothy wants to remain free.

This novel, not to be confused with Hangman by Daniel Cole, contains perhaps one of the most unique characters of the mystery-thriller genre.

No doubt there are those readers who will immediately compare Mr. Heath’s protagonist to that most famous maneater, Hannibal Lecter, but Timothy possesses something that character doesn’t: a conscience. He’s more similar to Mark Pryor’s psychopathic Dominic for as Dominic occasionally wonders how it would feel to actually experience normal emotions, Timothy suffers because he does. He doesn’t want to be what he is. It’s a misfortune brought on by chance and the worst of circumstances, and he can never allow himself to be close to anyone because of it.

Some parts of this story are definitely not for the squeamish. Other than his dietary habits, Timothy is occasionally called upon to do things considered beyond the general capacity or endurance of the common man, acts both painful physically as well as mentally. (Perhaps there should’ve been a rating posted on the title page, such as is listed before movies and television programs to warn the sensitive-stomached reader.) It is only his straightforward delivery of these facts that saves it from becoming a ghoulish and Grand Guignol-type narrative and instead makes it one in which the reader will experience momentary revulsion.

To accompany Timothy’s sideline of solving riddles and puzzles, each chapter heading has a riddle. Some are well-known and will be easy to guess; others more esoteric and difficult. Unfortunately, there’s no glossary with answers, and that oversight is a pity.

Hangman is a novel filled with dark humor and a fair amount of pathos. In Timothy Blake, the author has created a character with which the reader can sympathize, if not empathize, in spite of his predilection for breaking one of humankind’s most stringent taboos.