The Hanging Garden: A Novel 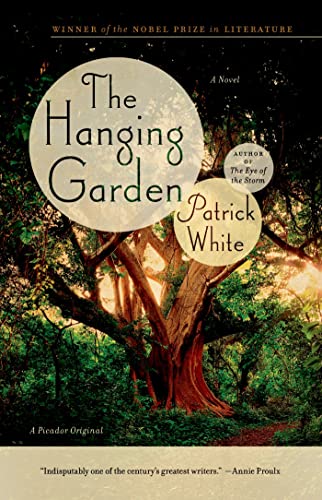 According to David Marr in the Afterword to the novel, Mr. White intended the book to be the first of three parts. The cover sheet for The Hanging Garden was marked “I” and on the back page of the last pages of the manuscript were notes or calculations about the ages of the main characters in future years, 1945 and 1981.

Further, while not a completed manuscript, The Hanging Garden was not a first draft. Mr. White had been making revisions and likely would have made further changes had he lived longer. The manuscript was discovered in his desk drawer in 1990 after his death.

The story takes place near Sydney, Australia, in 1942–1943 and revolves around the lives of two adolescent refugees from the war in Europe, Eirene and Gilbert.

The children are taken in by Mrs. Bulpit, an ill, disengaged widow who mostly leaves the kids to their own devices. Eirene, who is part Greek and whose father was killed in a Greek prison and Gilbert, who is English and has escaped the Blitz develop a close bond despite their differences.

The Hanging Garden is outstanding on every level. It insightfully explores and develops the inner lives of the two main characters and their relationships with each other and the different people they encounter. Some of the issues the work examines include sexuality and in Eirene’s case, being prey, life as refugees, and power. The narrative structure is innovative, and the writing is absolutely gorgeous.

Early on in the novel when Eirene and Gilbert first meet formally for tea with Mrs. Bulpit, the narrative brilliantly and seamlessly shifts back and forth between Gilbert’s and Eirene’s perpectives. Gilbert observes Eirene at the table:

“Just then she looked up. They were looking at each other. Her face sharpened, she was no Miss Adams trying to look grateful. She had probably done her own parting, and if she offered to do yours she would toss back the hair on either side flip flap, with a sharp-toothed comb before finding where the parting went, then dig in the teeth.”

In the next paragraph White conveys Eirene’s point of view about Gilbert:

“It was his eyes that surprised her. She had never looked into such pale eyes. They gave out nothing, like blind eyes, or old people with cataracts. Till they began shifting like shallow water, a thought or two scuttling through the shallows that he would rather have kept hidden from her, that he might have been afraid for her to know.”

Patrick White’s prose is lyrical and beautiful. His descriptions of the landscape are stunning. He describes the garden at Mrs. Bulpit’s house: “Light lay heavy—it made the paths look substantial where the concrete had not crumbled, tree trunks and the branches of trees had knotted like the muscles in men’s bodies. Wherever rust had broken out it glowered like blood in the act of drying.”

In addition to being poetic, the narrative is also very funny at times.

Specifically, the descriptions or caricatures of Mrs. Bulpit and Mrs. Lockhart (Eirene’s aunt) are biting and satirical. Mrs. Bulpit, a terrible cook and hostess is described serving tea: “When Mrs. Bulpit appeared she was wearing a pair of asbestos gloves halfway up her marzipan arm, her figure stooped out of proportion to the size and weight of the battered pie-dish she was carrying.”

The Hanging Garden is a very polished draft of a novel. There are a few sections that are a bit confusing and could use some clarification or sharpening. It’s impossible to know how Patrick White would have revised his work or if or how he would have developed the rest of the series.

The Hanging Garden, as it stands, seems heaven sent. If only Patrick White had lived to tell the rest of the tale.