The Hands of War: A Tale of Endurance and Hope from a Survivor of the Holocaust 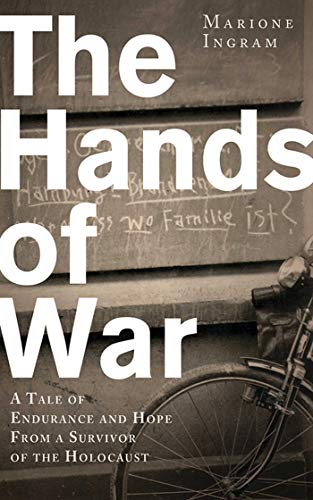 “Ms. Ingram looks back into her past, generating a stirring memoir filled with destruction and death, then revealing hope revived by dreams for parity for all of America’s inhabitants.”

Marione Ingram grew up in Hamburg, Germany, in the late 1930s and early 1940s. This inspiring account of World War II is seen through the eyes of a Jewish child. It allows the reader to experience the degradation of being a “subhuman” and the terror of a massive bombing campaign that flattened the city, creating raging fires that sucked the air out of the lungs of those trapped there.

More than 40,000 civilians perished in the Hamburg bombing campaign and almost the same number were wounded. The trauma resulting from this experience would haunt Ms. Ingram’s life thereafter, as would the nightmare of being a Jew in Nazi Germany.

Ms. Ingram grew up in an apartment building where neighbors were more than happy to report Jews to the Gestapo. She revived her mother from a suicide attempt when the family was assigned for deportation to a Nazi concentration or death camp.

Then the bombs began to fall as the Allies leveled Hamburg in eight straight days of carpet bombing. Ms. Ingram and her mother barely survived the devastating firestorms and the effects of starvation—until Nazi Germany finally fell.

Ironically, the Allied bombing prevented Ms. Ingram and her mother from being deported to a Nazi death camp, despite their names being on the deportation list for the next train.

Ms. Ingram eventually took shelter at a children’s home in a mansion once owned by wealthy Jewish bankers. This mansion was turned into a school and campus for Jewish survivors. It became known as the “Children of Blankenese.”

There she met Uri, a troubled Jewish orphan who, over a period of many months, revealed the terror, starvation, slavery, and brutality of Auschwitz to her. Uri’s horrific story illuminates the daily terror of life as a Jewish prisoner in Auschwitz.

Her memoir is extremely well developed, well researched, and delivered with vivid, animated description. She induces a depth of passion into her childhood memories, an aspect lacking in many memoirs.

Ms. Ingram as a child was a captivating and powerful personality, far beyond her age in terms of insight and empathy. The reader can clearly feel her compassion and defiance, as well as her enthusiasm for life and the love she holds for her parents. Her feelings are equally powerful for Uri, the lad with whom she was enamored at Blankenese. In this respect, the book reads more like a novel than a memoir.

The Hands of War is greatly enhanced by 60+ pictures dating from Ingram’s birth, throughout the Holocaust, and as a displaced person after the war. It is astounding that the author was able to acquire so much of her childhood in pictures, including photos of Hamburg captured during and shortly after the Allied carpet bombing. These pictures add a profound depth to the text, enabling the reader to sense the terror of bombing, the nightmares of its survivors, and the love of family.

The author eventually settles and marries the U.S., where she joins the civil rights movement. More than 70 years after the Holocaust, Ms. Ingram looks back into her past, generating a stirring memoir filled with destruction and death, then revealing hope revived by dreams for parity for all of America’s inhabitants.