Hand-Drying in America and Other Stories 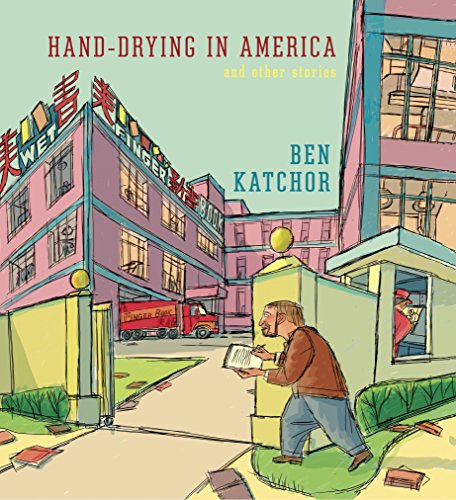 The author’s style and approach are previewed by the cover of Hand-Drying in America and Other Stories. A figure—presumably Ben Katchor—is seen lurking outside the gates of a corporate facility. The observer is taking notes on the goings at Wet Finger Book, whose corporate name, emblazoned along the top of the headquarters’ building, concurrently has Chinese language symbols and book images, the latter resembling the ubiquitous laundry hanging out-to-dry in a dense urban Chinatown setting.

The cover’s perspective reflects the author’s keen pursuit of the implications of technological change for culture, society, and media, including the role of a large scale printed publication, such as Metropolis, in which these 150+ stories were serialized between 1998 and 2012.

His is an exercise in minute observation, fanciful speculation, and trenchant commentary.

In selecting his titles Ben Katchor hints at what he invites his readers to experience: “Bannister Abuse,” “Slop Work,” “Logo Rage,” “The Screen Boy,” “The Call of the Wall,” “The Carbon Copy Building,” “Under the Bed,” “A Date in Architectural History,” and so many more. Take him up on the invitation and he will guide you into and through the fanciful, fantastical, at times farcical world of places in the 21st century.

As does the historic novelist, who teach while entertaining, Ben Katchor instructs and provokes, taking his readers on a tour of what was, exploring how what is today got to be what it is today, and speculating on what might be. His approach is historic and contextualized, embracing the mundane with meaning, celebrating the trivial, championing the absurd, and exploring the consequences of the preposterous taken to the ridiculous extreme.

In “Open House Season” Mr. Katchor chronicles the avocation of those who frequent open houses, in so doing making up for the inherent truth that so “few of us have the opportunities of a gas man or exterminator” to gain “knowledge of the domestic interiors of a city.”

He writes, “We are born, visit a narrow range of apartments, and then die in relative ignorance of how life was lived in our own time. So is it any wonder that the arrival of the first thick real estate section of the fall signals the start of a vibrant but little-known season of cultural activity? With no intention of buying or renting a new apartment, these open-house aficionados will, on an average Sunday, attend a dozen or more events for the sole purpose of experiencing the otherwise private living arrangements of the city.”

In a number of his stories Mr. Katchor glorifies the mundane fetishes of those who are not involved in issues of any consequence yet take their interest to a level of high purpose.

Ben Katchor employs varying degrees of abstraction and precision within and between the graphic panels, whose drawings are sometimes precise and other times more abstract. Some panels are two-dimensional and others three. These visual images are supplemented by signage, comments by the characters—dialogue in some instances and thoughts in still other contexts—plus explanatory narrative.

Collectively, the four communications forms amplify, reinforce, and deepen the message. Most often, all four—narrative text, graphic image, building signage and character commentary—are employed to tell the story while in some instances one or more is not utilized.

Just as he navigates the gritty aspects of a major metro such as New York, his characters are seldom drawn from the beautiful people crowd. Their demeanor and expressions mirror their place and places. His characters are sharply drawn with knowing, rugged, informed by years of living countenances. Children may not have childlike features, but rather appear as miniature-sized adults.

In one story, a woman, responds to a man’s invitation, “The plaza in front of the Guestrope Building? I’d rather not.”

“Please, Juliana, I only work here. I live in a renovated 1920s new tenement on Portoase Avenue, . . . I was born in the 1890s Egypt-limestone, walk-up-in Haluad Park,” he protests, beseeching her to accept his invitation.

“I’m sorry, I’d rather not,” she responds

“But Juliana, you mustn’t judge a person by his address.”

“It’s not you, it’s that plaza in front—it gives me the creeps.”

Although on occasion various explicit places are identified, the majority of the stories are set in ambiguous imaginary places, which are evidently modeled after New York City. These stories explore place from multiple perspectives—observation and contemplation, architecture and design, construction and creation, encounter and experience, use and symbolism.

In one story the author writes about how “the broken sidewalks of our cities must be preserved for future generations to enjoy,” while suggesting that “today’s progressive architect can incorporate stumbling blocks and trick points in the design of his building.”

Ben Katchor easily qualifies as an equal opportunity satirist. In one story, he describes an architect who insists on making a “cake staircase,” to access the mezzanine level of the hotel hosting the reception for his daughter’s wedding.

In another, a company seeking to maximize its revenues imposes a $1.50 fee for anyone who might look at its building. A shopping mall operator installs a coin fountain as a profit center on its property. An architect, promoting a major project, constructs a full scale model on the site of the proposed structure that is to be built.

Illustrative of the author’s fanciful speculations is his study of a wealthy individual who chose to move his funds offshore, so as to quality for public housing, where he resides on the weekend rather than in a country house. A fantabulous shoe salon in Bologna, Italy, offers a three kilometer carpeted portico stretching through the countryside for its patrons to try out their shoes, with “a number of stations marking the stages in the decision-making process,” and ascending the “gentle slope to a small building that houses the mirror.”

Hand-Drying in America and Other Stories is satirical and sardonic, wry and pedantic, observant and obsessive, trafficking in big concepts and hopelessly bogged down in the trivial, sharply focused and yet oblivious, celebrating permanence while exploring change, impressionistic yet precise.

This highly entertaining book will appeal to all interested in informed, often sharply humorous commentary on culture, design, psychology, and urban places.