Halston and Warhol: Silver and Suede 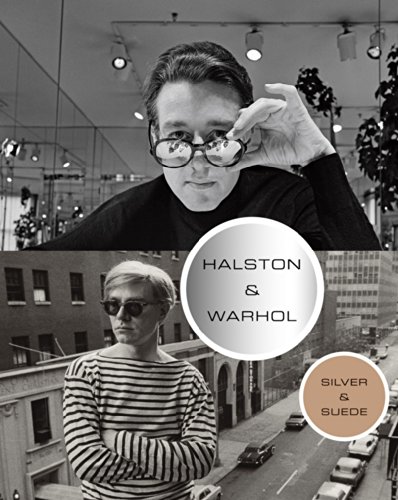 “Silver and Suede is an educational and entertaining glimpse into New York life during the 70s and 80s when the city and its lucky inhabitants feasted on life every night and day.”

The first thing that needs to be stated here is that this book serves as a catalog for an exhibition at the Andy Warhol Museum. Silver and Suede is far more engaging than with just some catalog of words  and photos.

The book is a warmly told tale of two of the 20th century’s greatest and most notable creators. One might say they were both artists but that drags up the age old quandary as to whether or not fashion is an art form. You can draw your own conclusions here.

What is of ultimate importance is that these two men led parallel and intersecting lives for almost 30 years. Yes, their roots may have been similar and yes their paths to glory, so to speak, might have been similar but their influence within pop culture remains somewhat incestuous and yet oddly divergent. They enjoyed a friendship and yet what most thought was an enduring one was smashed when one exposed the dirty little open secrets about the other.

The book is organized as a timetable in which one is able to see the simultaneous passage of time for both personalities as the chapters or separations are delineated by decade. Spliced into each with the abundance of photos are quotes from a few who had the pleasure of knowing them both and interacting with them together or separately. What is sort of interesting is omission or bare mentions of certain people who played pivotal parts in their respective lives, in particular Fred Hughes in Warhol’s.

The most endearing and possibly the most intimate part of the book is written by Halston’s niece who offers us quite a different insight into the man who is so easily associated with the louche life of Studio 54 and all the happenings that surrounded him at his home and during his travels. This segment was a high point of reading the book as well the most memorable.

All told, the book can easily serve as a crash course in the lives of both Halston and Andy Warhol and the parts they played within the times and fields of expertise in which they flourished.

For the more sophisticated reader, the book serves as a reminder of how prescient the two were when it came to their respective art forms and how they perceived fame. For those who are not as informed, Silver and Suede is an educational and entertaining glimpse into New York life during the 70s and 80s when the city and its lucky inhabitants feasted on life every night and day.