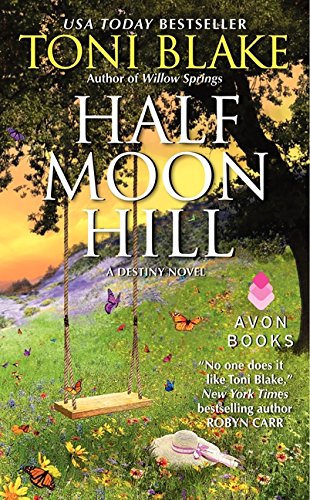 “And to bed they go. And to couch, and to lawn, . . . The book pretty quickly devolves to the point where they have sex, some other thing happens, then they have sex, then something else happens, they think about sex, then . . . It’s a vicious circle, leaving little space for character or story development . . .”

Anna Romo has had a bad year.

After finding out that the mother she grew up with was not her actual parent, she’s feeling off balance and tender. As a way to escape her confusion, she’s moved from the big city to Half Moon Hill, the small town where her brothers live.

While craving intimacy, she also needs space; in acknowledgment of that, she’s purchased a run-down manse, planning to fix it up and eventually run it as a B&B. Unfortunately, she knows little about cooking and even less about home repair.

Lucky for her, help is nearby—as close as her own woods in fact. Duke Dawson, biker, bar owner, and all around bad boy has been sleeping in the rundown cabin in her back lot. They meet unexpectedly and forge a bond of equal parts neediness and lust. Duke begins repairs on the house, and they start a summer affair that will rock them both.

Half Moon Hill is the latest in Toni Blake’s Destiny series. Each book has focused on the Romo family and the small town in which they live, detailing the melodramas of small town life.

Anna and Duke are rank and file romance hero and heroine; for example, she’s described as “gorgeous” and a “dark-haired, olive-skinned Barbie doll come to life.” Duke is “handsome,” “dangerous,” and sexy (even with his ubiquitous scar). Their conversations exist mainly as a vehicle for them to drop into fantasy, misunderstandings, or bed.

It’s a vicious circle, leaving little space for character or story development, which is too bad. Anna and particularly Duke are fairly interesting characters when they’re allowed to speak outside the bedroom. Though their backstories are slightly melodramatic, they’re presented well, with good dialogue and promising narrative.

Other characters don’t fare as well. Aside from Anna’s brother, Lucky, they have very little substance. A secondary storyline about the pregnancy of Anna’s sister-in-law is tossed in, but barely developed at all. It’s a distraction without a point.

Also distracting is Anna’s fascination with a 60-year-old diary she finds in her attic. It comes as no surprise that the love story detailed within echoes and presages Anna and Duke’s trysts.

What is surprising (and slightly creepy) is that a 30-something woman is not at all ironically taking love advice from a 16-year-old girl. The extended diary passages start kind of sweet, but soon seem superfluous. It’s almost as if the author couldn’t decide whether she wanted to tell the story of a sweet 50s romance, the story of a modern woman putting her life back together in a small town, or make the jump into straight up erotica.

On the technical front, Ms. Blake’s overuse of the ellipsis was maddening. At least a third of the sentences had at least one, and many had more than one. While use of non-standard punctuation can be effective at drawing in the eye and capturing attention, overuse is annoying.

Half Moon Hill could have been pleasant afternoon’s diversion had Ms. Blake settled on a storyline. Readers looking for a quick, non-taxing read (or those who enjoy skimming for the next “hot scene”) might find it enjoyable.