Half Baked: The Story of My Nerves, My Newborn, and How We Both Learned to Breathe 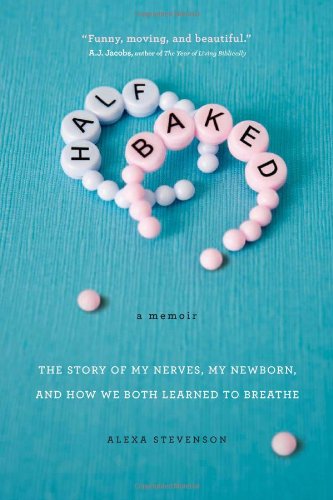 Half Baked is a book by blogger Alexa Stevenson in which she tells the tale of her path from in-vitro fertilization to the birth her very premature daughter, Simone, a baby whose diaper would fit in the palm of your hand. A baby of this stature is termed a “micro-preemie,” and her life is in constant jeopardy from the start. This makes for very exciting reading as the author shares her experiences and feelings while practically living in the hospital and witnessing various procedures that are done to her baby.

Despite weighing only 1.5 pounds at birth, baby Simone has a personality, and the author conveys it well.

Ms. Stevenson often has delightful insights, as when she describes panic disorder as “restless-leg syndrome of the soul.” Only someone who has been there can write like that, and her humor and openness are highly engaging.

She stays for all procedures, even when told “you may want to step out for this.” She faces the spinal taps, intubations, and even the dreaded oscillator along with Simone. Reading this book might sometimes prove uncomfortable for the squeamish, but the author does a nice job of explaining complex medical terms.

In describing the experience of being a patient, with all its invasiveness and humiliation, Ms. Stevenson maintains a generous and kind perspective. Still, she is disturbed by the machine-like quality of the healthcare system—using drugs and equipment when it seems that often a human touch is perhaps most needed.

Much of the baby’s care is provided by nurses rather than doctors. Consistent with the results of a recent study, Ms. Stevenson seems to find that nurses are more thorough and communicative. Nonetheless, there are several medical errors that are documented throughout the book—any one of which could have had dire consequences. In one instance, the nurse practitioner misplaces a breathing tube in Simone, nearly resulting in her death. It’s unlikely that a pediatric anesthesiologist would have had the same problem, but we don’t always have the most qualified person doing the job, so we make some compromises along the way.

On the other hand, the author makes it clear that familiarity with a patient is also important. We have to listen while a nurse unfamiliar with Simone does all the wrong things, again with potentially devastating effects. This had nothing to do with skill, but everything to do with paying attention to the patient.

There are certain protocols that are meant to be a one-size-fits-all solution to certain problems. The author describes how she is placed on a “grief” protocol after an unexpected bad outcome, and she recognizes that it is a script, intended to include every possible patient and every possible person who cares for the patient. The script is carried out on her at the wrong time in the wrong way, and her resentment and anger are palpable.

It was difficult to read the delivery scene in which the author suffered tremendous pain because she didn’t fit the mold of the typical woman in labor. This is another example of the mechanical quality of a medical system that too often applies general data from research, data which may fail to recognize the needs of a specific individual. Outliers suffer.

The complexity of delivering quality medical care is made very clear in this book, and despite the occasional missteps, the care Simone receives is excellent and often beyond excellent. The missteps serve as a reminder to the reader to stay involved in how medical care is delivered. Ms. Stevenson rejects the idea of having had a “miracle baby,” instead applauding the hard work and science behind the healthcare system.

The author immersed herself in her daughter’s care, unafraid to ask questions and become part of the healthcare team herself rather than take a passive role. She was fortunate to have a very supportive husband, family, and friends, as well as the ability to leave work and not lose her job, although that was a risk at one point. Ms. Stevenson’s husband had to continue working and could not be as available as his wife was. It must have been difficult for him and leads this reader to wonder what it would be like if our society allowed, indeed mandated, that both parents to take paid months off from work after having a baby.

The transition in expectation from a routine pregnancy to the incredible stresses of the NICU (Neonatal Intensive Care Unit) is something that changes a person, and Ms. Stevenson’s recognition of the person she has become by the end of the book is rewarding to read. Half Baked is written in a cozy and humorous style, with clever metaphors and ironies delivered in a self-deprecating, informal fashion. Despite the friendly style, this hard-to-put-down book is an important journey through the health care system. Most readers will not share Ms. Stevenson’s specific medical experience, but all readers can identify with the terrors of the parent trying to make her way through the mysteries of arcane medical vocabulary and complex procedures at a time of great vulnerability and fear.