Hadriana in All My Dreams 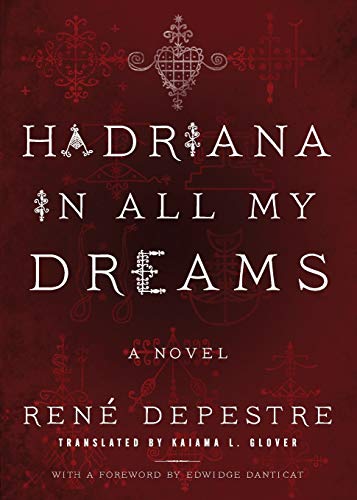 “Rene Depestre’s masterpiece and one of the greatest examples of Haitian literature.”

Hadriana in All My Dreams is a shocking, even orgiastic work with many an unexpected and surreal turn. As such, it is the kind of book where readers have to surrender themselves to the story and try not to be too easily offended. That, however, does not mean that Hadriana isn’t an exceptional novel. In fact, Hadriana can easily be considered Rene Depestre’s masterpiece and one of the greatest examples of Haitian literature.

On the surface, Hadriana appears to be a simple zombie story. When a beautiful French woman, Hadriana drops dead on her wedding day as she’s taking her vows, the entire town of Jacmel is devastated. Hadriana’s wedding, which was taking place during the Carnival of 1938, quickly turns into her funeral.

Soon after, the townspeople discover that someone has dug up Hadriana’s grave. Rumors quickly spread that Hadriana has not died but instead been turned into a zombie by a vodou witch doctor and forced to serve him till the end of her days. Thus, the mystery behind Hadriana’s death and disappearance is made into a folk legend, inextricably linked to the fate and subsequent demise of Jacmel.

The most interesting aspect of Hadriana in All My Dreams is that, unlike most zombie novels, it doesn’t turn itself into a slash and hack action cliché. Instead, it turns to Haitian folklore thus exploring voodoo culture. This culture and legends that emanate from it are infused into the story, mixing reality with surrealism. The two bleed into each other, turning Hadriana into an almost hallucinatory magical realist experience.

This experience is heightened by the fact that Hadriana’s wedding and funeral take place during Carnival. The colorful environment Carnival creates, the mythical, even slightly ridiculous costumes that everyone is wearing and the Voodoo traditions they follow to ensure the safe passage of Hadriana’s soul to the other world only add to this experience.

This, naturally, draw the rage of the local church. The ensuing conflict between the church and the locals highlight the conflict between Christianity and voodoo that is frequently encountered in Haiti. Ideas on what’s proper, right, and acceptable in such a situation as death are brought to the surface and are perhaps best answered by the townspeople’s interpretation of their dual beliefs: “Haiti’s charm in dealing with God is that the hips, loins, buttocks and private parts all take part in the soul’s most exalted deeds. They are the driving force of redemption.”

Another drawing force of the book is how zombification is presented as similar to colonial slavery. A second life does not imply a newfound freedom. Instead, it implies bondage for the zombie—in this case, for Hadriana—to her new master. This is why the reader is so drawn in by the third and final “movement” of the novel, narrated by the fake-dead Hadriana herself. The reader finds herself rooting for her escape, for her to have a chance at freedom and love at last.

In following Hadriana’s version of events, the reader is suddenly struck with the idea that Hadriana might be freer than all the townspeople combined. Her narration shows that the real zombie of the story could be Jacmel and even the entirety of Haiti, which have enslaved themselves through fear, neglect, repression, and desperation, as Rene Depestre has so eloquently put time and again.