H Is For Haiku: A Treasury of Haiku from A to Z 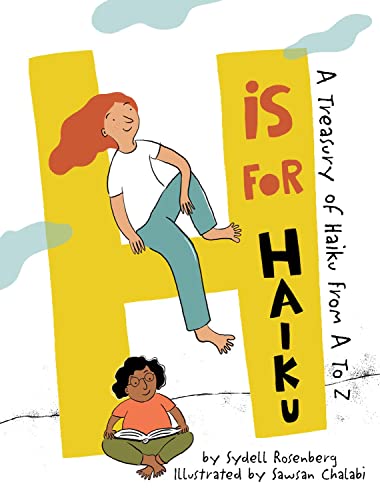 "H is for Haiku is a true treasure, filled with nuggets of joy and gems of delight—a gentle call to pause and pay attention to the small moments in each day."

To practice mindfulness meditation is to practice pausing to focus on the present moment, with intention, paying attention to right now. Sydell Rosenberg’s H is for Haiku invites the reader to do the same—see the world through her eyes as she stops to capture a moment. As noted on the back cover, “Inspired by her experiences living in New York City, Sydell Rosenberg’s haiku invite children and their parents to slow down, linger, and pay attention to the moments we often overlook.”

Haiku originated in Japan, a form of poetry used to highlight the observation of the seasons and the natural world. And while many writers of haiku do not strictly adhere to the suggested syllable counts, the traditional format of haiku consists of three lines—five syllables on the first line, seven on the second line, and five on the final line. As noted in her daughter’s (Amy Losak) introduction to this book, “Haiku poems make small moments big.” And in her own words, Rosenberg described haiku as that “split second one starts to touch a flower—real or plastic? That’s haiku. Before the hoof comes down—that’s haiku!”

During her lifetime, as a New York public school teacher and a charter member of the Haiku Society of America, Rosenberg’s haiku were widely published in various magazines. Although she also always dreamed of creating a book of haiku for children. In H is for Haiku, her daughter has assembled some of her mother’s work posthumously—a lovely expression of a daughter’s love for her mother, and a mother’s love of haiku.

“Drops of rain clanking / Into an old water can / Left outside to rust."

"Keeping their distance / From the hooves of the horses / Pigeons and sparrows."

This timeless book encourages us to be mindful and take breaks, using all of our senses, and appreciate a snapshot, “that fledgling moment, when the wingstrokes become sure—when the bird has staying power in the air.” H is for Haiku is a true treasure, filled with nuggets of joy and gems of delight—a gentle call to pause and pay attention to the small moments in each day.