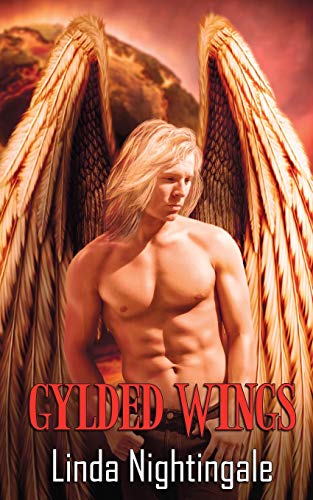 “an entertaining paranormal romance with a unique main character . . .”

In this novel, we are asked to have sympathy for the devil, the favorite but fallen son of heaven. While the angels of Earth believe he’s been forgiven after the Second Battle in Heaven, and has regained his place by God’s side, Lucifer has instead been dealt a divine double-cross.

“I suffered as I was meant to suffer. Even angels are sometimes blind to the shape of things to come.”

Reborn to a human mother, with no memory of his former life, he is now a slave called Gyldan, living with his brother and sister in a medieval-type kingdom where he’s already proven himself a troublemaker to his master.

Gyldan has fallen in love with a human, producing a winged son. “Like a hatchling chick, his tiny wings broke free. I was beyond proud of this tiny boy with his gold leaf wings. I had finally done something worthwhile.”

It is then he meets a woman who speaks and acts strangely and is determined to help him escape his bondage. Brit Montgomery has been sent from Earth to another dimension to rescue three angels.

With the promise to return and save his child, its mother, and his sister, Sarah, Gylden reluctantly goes with Brit, but once on Earth, events don’t go as either expects.

At first, the naïve Gyldan is fascinated if somewhat shocked by his new surroundings but after a few false starts, he begins to walk the walk and talk the talk and it isn’t long before memories not his own begin to intrude.

It turns out Gyldan is an amnesiac Lucifer, and the angels sending Brit to rescue him are his lieutenants, surviving from the Second Battle.

When they confront Gyldan, he denies their claims. “‘I am not this Devil of yours. You say angels are created by your God? I had a living, breathing mother. I am not like you.’ Lucifer had fatal charm. That left me out of the running. Charm and I were strangers.”

Uncomfortably settling into the 21st century atmosphere of hedonistic pleasure, Gyldan the innocent slowly accepts the fact that he’s Lucifer the fallen Morning Star. As his powers manifest, he realizes he has to make a great many choices. Will he once again demand his place as the most favored of all? Will he become the Prince of Darkness and proudly rule Hell, tempting Man to evil? Or will he give up everything to stay on Earth with Brit and his son?

“I am Lucifer. I must accept that fact. But I’m also Gyldan, a winged slave who loves his son, his sister, and Brit. When would Lucifer manifest in full glory? How could I reconcile the two different parts of me?”

Therein lies the tale of the angel with golden wings, and the choices he makes on his second time around.

Nightingale has a penchant for creating fascinating protagonists. Her vampiric Morgan d’Arcy is one; Gyldan is another. Indeed, in some ways the two are interchangeable. Take away the golden wings and insert fangs, and Gyldan the Fallen Angel becomes Morgan the Vampyre . . . physically tempting, sexually skillful, verbally adept.

Creating characters isn’t this author’s only strong point. Her words are rhythmic, flowing across the page in a poetic stream of short but vision-evoking sentences, as in:

“The door creaked. Candlelight seeped through the crack. Danger lurked in the silence and darkness beyond the sliver of light.  Like a living creature, its presence breathed chills down my neck.”

Though some may be a bit confused by the prologue about the Second Battle in Heaven and the abrupt segue into Chapter One which seems completely unrelated, the mystery is eventually made clear through Gylden’s own personal narrative.

He takes the reader with him on his flight of discovery, to suffer the uncertainty as well as the acceptance of inevitable truth. Those familiar with the Apocrypha will be recognize some of the events and names mentioned. Those who aren’t will appreciate the way the author weaves these accounts into the story, making a seamless narrative combining biblical ideology and literary fiction.