Guy Bourdin: In Between 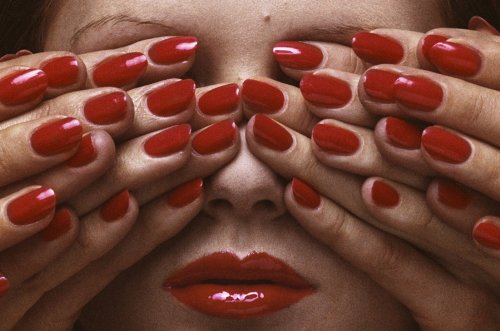 There are few words that can describe the influence and the arresting images that Mr. Bourdin graciously bestowed upon us during his career. In Between features some 400 photographs that appeared in (French) Vogue during the period of 30 years, from the 50s through the 80s. The bulk of the work was produced during the 70s when Bourdin not only was shooting incredible editorials for the magazine, but also was serving as the photographer of record for so many international fashion brands, in particular Charles Jourdan.

What is blatantly apparent is that Mr. Bourdin had his own particular vision of his subjects and always contributed some perverse notion—not perverted—to those subjects. Some of the most charming and yet disturbing images might be the extraordinarily expensive “haute joallier” that he might have photographed on a toddler or a prepubescent little girl—who was also fully made up, “en maquillage.” In a way his visions, his finished product, were so far ahead of their time that they might be considered unacceptable for consumption today.

One must also keep in mind when looking at the 400 images is that the artist/photographer relied on his abilities rather than on the darkroom tricks of the day. There was no Photoshop, and he abhorred retouching, so what you see is the raw photograph as he wanted you to see it. His predilection for cropping was a trick that was employed in both his editorial works and his commercial works—most notably on page 209 with his photograph for Charles Jourdan. Among his pet subjects—perhaps we might call them fetishes—were the extremely precious jewelry and shoes he frequently added to a scene.

Lastly it must be noted that Mr. Bourdin loved his drama. There are many photographs that tell a story, sometimes sordid, sometimes perverse, but never simple. He allows the viewer to draw his or her own conclusion or to create a personal story around the photograph.

The name Guy Bourdin is rarely referenced in the contemporary world of fashion and fashion advertising, yet he was the one who paved the way for the provocative, the perverse, and the controversial in art itself in many ways. His son allowed Ms. Verthime full access to the archive, thus permitting this worthy homage to one of the greatest photographers of the 20th century to be added to the annals of high art.