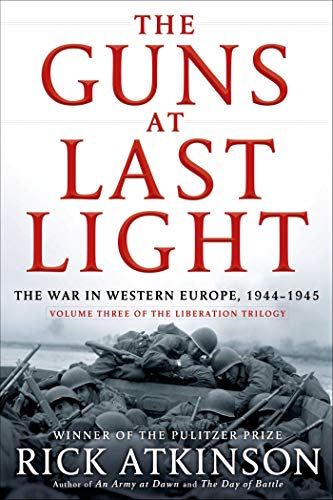 “. . . a marvelous capstone to a trilogy that will make Rick Atkinson to the U.S. Army in the European Theater of Operations what Shelby Foote is to the Civil War . . .”

“You will enter the continent of Europe and, in conjunction with the other United Nations, undertake operations aimed at the heart of Germany and the destruction of her armed forces.”
—Directive to Supreme Commander Allied Expeditionary Force,
February 12, 1944

With these 30 words, the most ambitious and risky amphibious assault in history was undertaken. Rick Atkinson’s final book in the Liberation Trilogy is one of the most anticipated volumes of military history in 2013, and should be on the top of your Amazon Wish List.

Mr. Atkinson has the remarkable ability to combine narrative history, personal anecdotes, and trivial details to provide a highly readable account of the campaign to liberate Europe and conquer Germany in the 11 months from the Normandy landings to the Nazi surrender.

Unlike much of the recent history of World War II which has focused on individual campaigns, personal memoirs, or unit histories, Mr. Atkinson seeks to tell the entire story of the fighting to liberate Western Europe, focusing on the rising combat capability and influence of the U.S. Army through 1944 and into 1945. Written with the same incisive style as his previous two volumes, the interactions of American forces with often prickly British and French allies are laid out via numerous diary and personal papers which show that the so-called “Grand Alliance” was not always grand nor was it always collegial.

The strategic and tactical actions of their German opponents is also described via numerous unit reports and personal accounts to demonstrate that even after almost five years of war and thousands of casualties, the Wehrmacht remained a dangerous adversary.

Using an astounding amount of primary materials detailed in several hundred pages of notes and biblography, Mr. Atkinson provides both the GIs' view of combat and the almost constant bickering and infighting of generals on both sides of the conflict. He spares no Allied commander the criticism they deserve and lays out numerous flawed Allied command judgments, from failing to close the Falaise Gap to the Market-Garden fiasco to the Hurtgen Forest debacle.

When reading this book, it often seems that the only reason the Allies were successful was the German high command was even more dysfunctional, especially on the crucial question of when and where to commit the limited Panzer divisions to counterattack the expected Allied D-Day landings.

One of the nice features of this volume, like the entire trilogy, is that Mr. Atkinson understands the importance of maps for the general reader. The Guns at Last Light has wonderfully drawn and well placed maps so the reader can understand the sweep of battle and the significant influence that geography played in the conduct of combat operations.

Several fascinating themes are highlighted by Mr. Atkinson that should be of great interest to students of World War II. First, the Allied armies did not simply roll over the Germans in an avalanche of men and materials.

Although logistically the Allies were far better off than the Wehrmacht and Luftwaffe, the lengthy Allied supply routes and the failure to seize the vital port of Antwerp and its approaches for three critical months in the fall of 1944 is shown to be the major factor in the grinding halt of the headlong offensive to the German border.

Second, in spite of huge losses in men and material the German Army suffered in France, the Allies lost heavily as well and many British and American infantry units were vastly lacing in strength by the fall of 1944 because of manpower decisions made by each country in the early years of the war.

Although the Allies could rely on near total air supremacy after a brutal air campaign and the American Army could provide massive amounts of firepower via a well developed artillery arm, the Allies never had the sort of huge advantage in manpower and material commonly assumed.

Finally, the infighting and occasional incompetence among the Allied high command probably added six months and thousands of casualties to the war. Mr. Atkinson uses recent scholarship and analysis to make a convincing case that personality disputes between Dwight Eisenhower and General Jacob Devers possibly prevented a greater role for the American 6th Army Group in the fall of 1944, including an early crossing of the Rhine in southern Germany that might have prevented the German Ardennes Offensive.

One omission from his book—and from just about every book on World War II in Europe—is an account of the Italian Front after the fall of Rome. Like many historians, Mr. Atkinson’s second volume on the Italian campaign tapers off after the Normandy invasion and relegates the annals of the American Fifth and British Eighth Armies to an occasional mention.

Other than James Holland, virtually no historian has undertaken a recent comprehensive history of the Mediterranean Theater after June 6, 1944, even though heavy fighting with thousands of Allied casualties continued through the German surrender.

There have been many excellent single volume histories on World War II recently, most notably by Max Hastings, Andrew Roberts, and Antony Beevor. But Mr. Atkinson has a rare ability to combine a historian’s eye with a reporter’s pen to simultaneously provide a sweep and detail to combat that is both unique and enjoyable for the novice student and the hardiest grognard.

Both the style and content of this book provide a marvelous capstone to a trilogy that will make Rick Atkinson to the U.S. Army in the European Theater of Operations what Shelby Foote is to the Civil War, the essential starting point to understanding the U.S. Army’s transformation in World War II from a force of ragged draftees to one of the most capable combat armies in history.