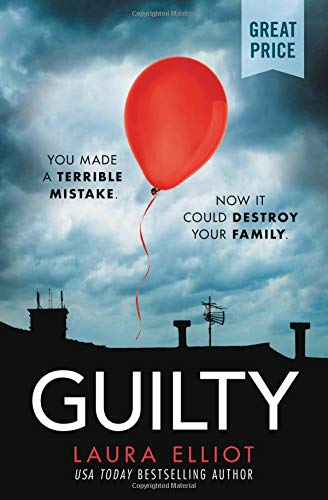 When a crime is committed, it should be considered the suspect is presumed innocent until proven guilty. Unfortunately, this is not the case with Karl Lawson.

In Glenmoore, a suburb of Dublin, Ireland, Karl and his wife Nicole have a small daughter, Sasha. They live a few houses away from Karl's brother Justin, his spouse Jenna, and their three kids, 13-year-old Constance, and the younger children, Matthew and Lara.

The two families are close, and teenaged Constance is showing a rebellious streak. Karl offers her and some friends tickets to see the Blasted Glass, a hard-rock band Constance adores, but her parents refuse to let her go, stating she is too young to attend a concert with a group acknowledged for their offensive lyrics. Karl, an editor for Hitz music magazine receives exciting perks for Constance, yet prohibited from attending this venue, she feels she is being treated like a baby.

One night on a dare Constance hopes to prove herself in a "gang" known as The Fearless. She takes spray paint and her flashlight and heads to an abandoned and allegedly haunted house not far from her own residence. There, she goes into the basement and paints the words "Blasted Glass" on the walls then videos it to send to the members. However, she does not return home and the next morning her parents panic.

They immediately call Karl, thinking she may have gone to him after a blow-out between them the night before regarding the concert. Whenever Constance fights with her folks, she uses Karl as her sounding board. But she did not go to her uncle’s.

Frantic, Justin and Jenna contact the authorities while Karl searchers the nearby area. He goes to a beach cove called Ben's Shack where he and his bother hung out as kids, and where present day youth also go. It's a place to drink, dance and let loose, but Karl discovers no one has been there for a long while.

Karl kept a secret from his brother and sister-in-law regarding Constance. Three weeks prior, she was at Ben's Shack and phoned him asking him to pick her up. She had been drinking and got sick and didn't want her parents to know. She promised Karl she'd never pull anything so stupid again and swore him to secrecy. He trusted her, so he never relayed the situation to Justin, which when admitting it to them now, they believe he is involved with her going missing.

To make matters worse Amanda Bowe, a reporter for the local rag, Capital Eye, is out to condemn Karl by printing things about him that are inflammatory and misconstrued. Karl believes she is seeking retribution because he turned down her application for an opening at the magazine. The information she reports is a hair-breadth short of libel.

Though innocent, Karl is arrested and jailed when it is learned Constance's death was an accident caused by Karl's long-time friend, Dominick Kelly. Overcome by guilt he takes his own life. However, Karl's life is now over. He loses his job, Nicole takes Sasha and flees to New York to her parents’ home, his house is repossessed, and Justin and Jenna break all ties with him, making him a pariah in his town.

Amanda, ashamed of her scandalous reporting does a turnabout by organizing a campaign to right a wrong. This is not enough. Karl's life is destroyed, and he now lives on the street, becomes an alcoholic, wondering if he will ever be free.

Meanwhile, Amanda receives threats on her life that she concludes are from Karl. Though she also solicits information on a drug gang, she does not believe they are  targeting her, though they are reputed to be extremely dangerous. She runs into Karl after his release from jail at Dominick's mother's funeral.

"His voice came from behind her. 'Vengeance is mine.' He spoke softly but distinctly. 'And recompense, for the time when their foot shall slip . . .' The quote sounded biblical and threatening. Was he reminding her of Dominick Kelly? His religious fervour as he waited for death to claim him? Amanda stood up from the kneeler and turned to face him. She had never noticed the colour of his eyes until now. Cloudy green-grey, like the sea before it stormed. He paused, as if allowing the words to settle between them. She remained silent, struggling and failing to find something to say that could connect them. She was the first to look away. He walked back to the car part, folded his long figure into his car and drove away."

Six years pass with Amanda married to the wealthy owner of a conglomerate including the magazine where Karl worked. She is doing prosperous and has a son  named Marcus. While on a tryst with a colleague, Amanda receives a call from her sister sayings Marcus is missing. Now it is Amanda who is on the receiving end of speculation. Why didn't she pick up the boy from school? Where was she? And, most important, who took her child?

Wild with grief and guilt, days pass and Amanda feels Marcus's abduction is due to Karl. But why would he do this? Years have passed, and she tried to help him after his exoneration. Now, her marriage is in shambles as well as her career, and no one believes Karl is involved. It is easy to surmise Karl's duplicity in this after Amanda caused the ruination of his life, but isn't that what journalists do? Proclaim guilt before innocence?

Well written with unexpected twists and turns, the suspense in Guilty is spine-tingling, especially with Karl's suffering and later Amanda's, but could Karl be so devious as to prove revenge really is sweet?