A Guide for the Perplexed: A Novel 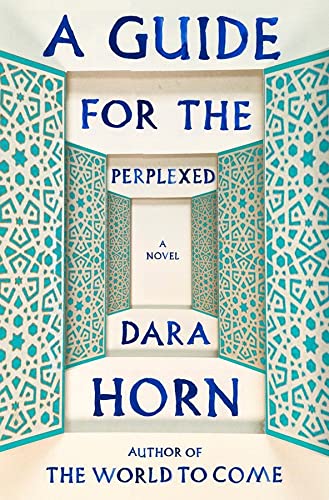 “. . . a nerve-wracking international thriller and a group portrait of individuals dealing with circumstances beyond their control.”

Dara Horn's A Guide for the Perplexed is an international thriller, a meditation on privacy and history, an exploration of Jewish history from medieval times to the Victorian era, and a retelling of the Biblical Joseph story.

Unlike other thrillers in which a masculine cipher races against a clock against anonymously foreign adversaries, Ms. Horn makes all characters, the heroic and the evil, all too human and all too real.

Josephine Ashkenazi, the head of an international social media business, is sent to post-revolutionary Cairo to assist the library with its computer programs—a benevolent act to a developing nation.

Josie's husband Itamar and her daughter, Tali, did not go along with her on this trip. Neither did Judith, Josie's younger sister, although Judith did insist Josie go to Egypt.

Since youth, Judith harbored jealousy and rage toward her brilliant, asthmatic younger sister. Following Josie's kidnapping, Judith works to infiltrate herself into Josie's family, slowly coming to replace Josie as Tali's mother. Things are further complicated by the fact that Judith had strong feelings for Itamar before Josie stole him from her.

In addition to this contemporary narrative, Ms. Horn adds the elements of a historical novel with the intellectual adventures of Solomon Schechter. Professor Schechter teaches at Cambridge in the United Kingdom during the Victorian era.

After having a conversation with the twins Mrs. Agnes Lewis and Mrs. Margaret Gibson, Professor Schechter heads off to Cairo in search of a hidden genizah. A genizah is a room in a synagogue that warehouses papers and written materials relating to mundane things.

Josephine Ashkenazi's revolutionary social media program is also called Genizah and it inventories mundane things in people's lives. Early in the book, Josie uses the program to find the shoes Tali had misplaced. (Both Solomon Schechter and the twins, Mrs. Lewis and Mrs. Gibson, are actual historical figures.)

As the plot unfolds, Ms. Horn increases the depth of each character's humanity. While they begin as anonymous villains, Josie's captors reveal themselves through the actions and words that motivate them. A man wearing mirrored sunglasses and wielding a metal baseball bat appears threatening to Josie. But then Josie learns that he lost his son when the police captured him. He misses his son like Josie misses Tali. Because he lost his son, the man wants Josie to create malware to infect the police's surveillance program.

The man thinks the police's program is based on Josie's genizah, since the police use it to spy on people. Between the threats, intimidation, and beatings, Josie finds solace in a dual language Hebrew and French edition of Maimonides's classic philosophical treatise called The Guide for the Perplexed. Written in 1204, it was a philosophical work that explored the nature of God and the question of evil.

To call this novel an international thriller seems to diminish it.

Yet at the same time Ms. Horn has pushed the genre into newer and stranger places. Unlike the pseudo-history and sub-standard writing of The Da Vinci Code, A Guide for the Perplexed weaves together historical figures, Jewish philosophy, and the current political chaos in Egypt around compelling characters.

While Judith's usurpation of Josie's family comes across as manipulative and underhanded, she genuinely works to improve Tali's eccentric behavior and remedial reading ability.

Every character receives a careful admixture of unsympathetic attributes and physical or mental vulnerabilities. A Guide for the Perplexed succeeds at being both a nerve-wracking international thriller and a group portrait of individuals dealing with circumstances beyond their control.