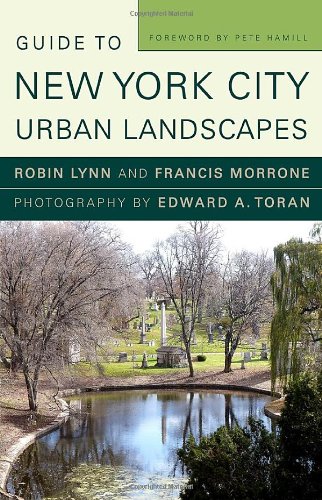 Profiling some 38 New York City urban landscapes, Guide to New York City Urban Landscapes reveals a plethora of diverse urban places that many, even the most knowledgeable New Yorker, may not fully appreciate—or even know about.

With more and more people drawn to cities—great cities are increasingly expected to feature places for outdoor experiences—access to the outdoors and nature becomes ever more important. The editors suggest that the discipline of urban landscape design will assume growing prominence, projecting that “it is very likely that urban landscape designers soon will have the public recognition equal to that of the ‘starchitects’ of today.”

The essays on each of these urban design places describe and inform, tracing history, key events and factors that influence the form and development of that particular place, exploring the connection of the place to the community, including the politics favoring and opposing development, and proposed development initiatives.

In addition to guidance about how to interact with and experience these various urban places, also provided is summary information concerning hours, restrooms, regulations, resources for further information, and transit access: via subway, water taxi, bus.

Considering the work of the controversial Robert Moses from a project perspective, addressing the end result rather than the often brutal tactics he employed to achieve that result, the editors judge that many of the master builder’s numerous contributions are “often surprisingly innovative.”

While featuring the contemporary exemplars of landscape architecture and urban design, the editors are particularly taken with “urban landscape design.” They assert that theirs is the “first wide ranging study of New York urban landscapes from the first half of the 19th century to, well, tomorrow. And that’s why a book alone is not enough.”

Responding to the consideration that “the most significant projects of our time are works in progress” they provide the necessary solution, for “The New York Urban Landscapes blog will follow the development of these works in progress, as well as changes and reactions to them. The blog will allow us to comment on vastly more urban landscapes than we can fit between the covers of a book.”

This guide opens with a tour of parks along the water’s edge, as would be expected, the selection is dominated by Manhattan and to a lesser degree Brooklyn with cover age of notable parks in Queens, the Bronx, Staten Island, as well as parks on Roosevelt Island, Governor’s Island and Randall’s Island.

Turning inland, in addition to covering a number of major parks, an eclectic array of urban places are covered including Green Roofs, cultural institutions, atriums, plazas and circles, boulevards, cemeteries, and reclaimed: the High Line, summarized as “one mile long, 30 feet wide, and very, very popular.”

This very ordering of along the waters edge and inland, then classified by the different types of urban landscapes, represents a most effective structured typology for appreciating urban places, and also is an important contribution of this volume.

Though the focus of the volume is on urban places, the editors include a sampling of some 50-plus “places to eat and drink where the space is right.” Illustrative of the attitude that the editors apply to these eating and drinking places is the commentary concerning Le Parker Meridien: “This bar was set down plunk in the middle of a public space that was usurped by the hotel. Guess who enter off of 57th street pull their luggage through the space to get to the check-in desk. When the waitress asks you for your drink order, tell him or her that you don’t have to buy anything to occupy public space, and they’ll go away.”

Combing descriptive and at times evocative word pictures, necessary facts and figures, and stunning visual images Guide to New York City Urban Landscapes is a most useful resource for all who live in New York, spend any time there, or are students of the role of urban landscape in making our places appealing and habitable.