A Guest at the Shooters' Banquet: My Grandfather's SS Past, My Jewish Family, A Search for the Truth 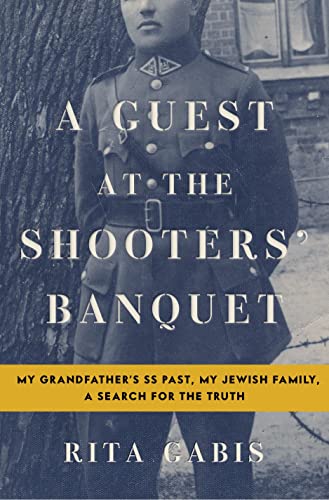 “In this intricate and intimate journey Rita Gabis brings macrocosmic Holocaust horror into the microcosm of our dining rooms, kitchens, and bedrooms—a noble feat, one you will not soon forget.”

Author Rita Gabis is an award-winning poet and historian. This book induces a heart-impacting emotional blow. The metaphoric syntactical language and construction of her research and discoveries in A Guest at the Shooters’ Banquet—as they are uncovered and cataloged in carefully layered detail—is clear evidence of a poet’s eyes, ears, and emotional sensibility. Just as an archaeologist uses tiny brushes and tooth picks to bring to light long-buried artifacts and bones, so Gabis’ selective use of words—both those she finds in her research and those she chooses to portray her discoveries—alone make this book a valuable addition to Holocaust literature, as well as memoir writing.

Lithuania is at the epicenter of her memoir. The Holocaust in Nazi occupied Lithuania is responsible for the near total destruction of Lithuanian Jews  living in Nazi-controlled Lithuanian and Polish territories. More than 95 percent of Lithuania's Jewish population was slaughtered over the three-year German occupation, a higher number than any other country suffered during the Holocaust. Out of approximately 208,000 to 210,000 Jews, an estimated 190,000–195,000 were killed during this mass extermination between June and December 1941.

Gabis aligned with many other historians to situate culpability for this massive horror largely on organized, local collaboration by non-Jewish Lithuanians.

U.S. born Gabis’ maternal parentage is Lithuanian Catholic and paternal, Eastern European Jews. The two sides were mainly separate in her childhood and youth. She was raised largely among her mid-western Lithuanian Catholic family. They spent time in the summers with her Jewish grandmother and other relatives on Martha’s Vineyard. Her second marriage is to a Jew.

A key figure in Gabis’ childhood and adolescence was her beloved Lithuanian grandfather whom she called Senelis. Around five years ago (2010) she was horrified to learn that between 1941 and 1943 her grandfather served as the chief of Security Police under the Gestapo in the Lithuanian town of Ŝvenĉionys. (The home of her maternal family. Some relatives live there still.)

During the fall of 1941, 8,000 Jews were murdered over the course of three days in the nearby killing field of Poligon (“range” in Lithuanian). The local Polish population was likewise hunted down and killed over the following year.

One of Gabis’ major pre-occupations was to hear from firsthand witnesses to the Poligon massacre what happened and what role her grandfather played. Her exhaustive research was as much to try to disprove what she had learned about him, as to prove his war crimes.

The other question looming large for her is how her grandfather and family were allowed entry to the United States in 1945. How was he able to gain immigration permission? Did he lie about his Nazi collaboration? Or did he lie by omission? Or something else?

(Some historical context: Thousands of local Jews and Poles perished during WWII. One Holocaust memorial of the Poligon massacre reads: "Here lie 8000 Jews from Ŝvenĉionys and its vicinity, who were murdered by the German Nazis and their local assistants on the 15th and 16th of Tishrei 5702 (October 7th and 8th 1941)."

As Gabis learned the Jews of Svintsyan (now Svencioneliai) and Jews brought to the Ghetto from surrounding communities were locked in the barracks at Poligon (a former Polish army camp) for several days and then shot, a total of 3,726 Jews from the Svintsyan Ghetto—1,169 Jewish men, 1,840 Jewish women, and 717 Jewish children. Svintsyan Ghetto was completely liquidated in April 1943 when the remaining Jews were packed into boxcars. Told they were going to Kovno, they were taken instead at Ponary, the mass slaughter site of Jews from Vilna. One guard opened the door and told the occupants to run, but guards shot at them with only a few making it to the forest. (Among many of Gabis’ interviewees, one eyewitness reveals shocking details of this atrocity.)

Initially when Gabis learned of her grandfather’s collaboration with the Nazi occupiers a huge hole opened beneath her. In an attempt to still the aftershocks to her identity and thoroughly shaken sense of self, she embarked on a four-year journey of discovery to four countries—Lithuania, Germany, Israel, and Poland—to interview witnesses to the atrocities and the Nazi occupation.

She searched out relatives, Holocaust survivors, and witnesses. She conducted painstaking and impeccable research in archives and libraries starting in the Holocaust Museum in Washington, DC. She found troves of source material in all these countries, testament to the efforts of many people to document the horrors of those years. Almost desperately she sought proof positive that her grandfather was indeed a high-level Lithuanian collaborator and not the warm, generous, and loving figure of her youth—or maybe both.

On one occasion when Gabis visited Ŝvenĉionys, she spoke with a local Holocaust archivist:

“’I’ve heard that after the killings at Poligon, there was a banquet in Ŝvenĉionys for the shooters.’
‘It was quite common for there to be’—he pauses, looking for a word—‘parties afterward for those who participated. It happened in many places.’

His face is flat, readable and unreadable at the same time. A rather slight, gentle man, he is not the person you would expect to find trudging through the violence of his country’s past.”

From this man’s memory and other information arose the title of the book. Was her grandfather among the shooters or the one organizing the Jews into groups of 50 as they shuffled off to be shot? The Lithuanian Security Police worked with a list. Had Senelis drawn up the list? Did he attend the banquet that welcomed the shooters, men already drunk with killing and alcohol as they returned each night from slaughtering men, women, and children in the thousands? Was he at the main table hobnobbing and laughing with the Nazis in charge of the massacre?

Gabis’ descriptions of the banquets and the massacre and much else sear the reader’s mind. On one of her Lithuanian trips accompanied by a local guide she arranges to see the site of the Poligon massacre, a long mound of earth now. She walks on the same road the massacred Jews did from the barracks to the killing mound:

“It occurs to me that I’m in exactly the right shape to take this road. That anyone who walks it should feel like vomiting. Anyone who passes the long, thin shadow of trees, the sky announcing the entrance of summer, should feel the earth spin and not be able to stop it.

“I think they were brought in that way,” she says. (Gierde, [the guide])
The road is sandy, stretches farther than I can see. One road? For eight thousand people.”

Gabis imagines the scene based on what she sees as well as eyewitness accounts she hears:

“At Poligon the ground was littered with rags, caps, headscarves of family and friends. Frost heaves opened the earth. Nearby farmers must have dreaded the coming spring, a thaw and washouts that would carry bones into the rye and flax fields. They had crop quotas the local ‘headmen’ handed down from the Germans—unmet the last summer of ’41 and after the fall harvest of the same year. And now spring would mean corpses of Jews showing up like a nightmare, Jews who had a way of wreaking havoc, even dead Jews, even the Jews who were your friends.”

“The men three hundred or so of them had to dig into brush at least three meters deep. The problem with rain, steady, fall rain, is that it fills up the hollow you’ve made in the ground, so you’re standing in water as you lift the mud out. And lift it out again. In the bushes Vlad Ankyanets testifies, there were approximately thirty policemen milling around, ten to fifteen local Lithuanians and two Germans. The diggers had been ordered to show up at the Svencioneliai magistrate’s at 9:00 pm with shovels and the magistrate’s secretary thrust into their hands at their own doorsteps. Ankyanets and the other four were lined up in groups of four and went across a bridge to the Zeimiani River to the site where the pit needed to be made ready by morning . . . Jews had to be exterminated.”

A Guest at the Shooter’s Banquet is a major contribution to our collective memory of “man’s inhumanity to man.” But Gabis’ singular achievement is to render a family memoir that is both tender and fierce from the most terrible inhumanity—in scale at least—we have ever witnessed. In this intricate and intimate journey she brings macrocosmic Holocaust horror into the microcosm of our dining rooms, kitchens, and bedrooms—a noble feat, one you will not soon forget.

Janet Levine is a decades’ long freelance journalist, author, and lifelong human rights activist. Born in South Africa, her book Inside Apartheid: One Woman’s Struggle in South Africa represents but one element of her involvement in the anti-apartheid movement.