A Guest at the Feast: Essays 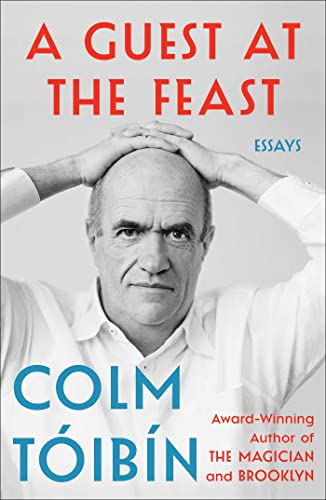 “to the faithful, the lapsed, and the strident anti-Catholic public this collection of essays offers a greater understanding of history and how parishioner activism has changed the Church, if only a scintilla.”

Toibin’s sprawling collection of essays about 20th century Ireland and sociological changes ushered into the 21st requires an alert mind to digest, but there are pockets of humor including his opening line, “It all started with my balls.” From this opening salvo he details his prostate cancer treatment with the detachment of a journalist.

In “A Guest at the Feast” Toibin reflects on the treatment of the Roma people; forced to wander in their caravans because of their “otherness” they were unwelcome in traditional communities. His memory is of one of the children, released from jail, who set about breaking only the shop windows of shopkeepers who had been cruel to his family.

“He knew the town like a sociologist; he must have watched it as a small boy arriving with his mother and father and knew which shopkeepers deserved to have their windows broken and which did not.”

“Wexford town has a strange beauty because of the washed light of the early winter. The town still looks like a medieval port town and the atmosphere is full of the rich mixtures of the silted-up harbor and the fertile hinterland. This Viking settlement was an important center of trade, its tone was set by the Normans and to this day half of the names of the residents are Norman. All of us have a landscape of the soul whose contours and resonances are etched into us and haunt us.” Toibin’s verse in evoking time and place lingers like a gentle breeze throughout this work.

His essay, “The Paradoxical Pope,” imbues the reader with a sense of time and place when Humane Vitae was issued by Pope Paul VI in 1968. The results of the decree significantly curbed Catholic contributions and participation from parishioners after priests were urged to deny confessional absolution to laypeople using birth control. His recollections of Pope John Paul II are more charitable, giving readers new insight into Karol Wojtyla’s formative years in Poland under Nazi occupation and his late embrace of priesthood.

In “Among the Flutters,” Toibin reveals the former power of the Catholic Church in public school doctrine, local governance, and of course, healthcare. He recites episode after episode of Church leaders failing to protect children from the sexual abuse of priests, who were ferried around to unsuspecting church communities when their devious immoral acts were discovered. Toibin makes no effort to spare the church, quoting freely with journalistic integrity the actual statements of cardinals, the president of the catholic league, and other public figures to defend the church’s sanction of pedophile priests while disabusing the voices of children.

His review of “The Bergoglio Smile: Pope Francis” from The London Review of Books, critiques the Church in Argentina’s supporting the cruel dictatorship that was eventually taken to task by The Mothers of the Plaza de Mayo, a human rights organization.

Toibin’s review of Marilynne Robinson’s “Putting Religion in Its Place” is a breath of fresh air in the religious dogma that has so defined Ireland and many other countries. Open the window and let in some secular fresh air. In this, non-Catholics will understand the smothering impact of the Church emphasizing their nonmembership with relief.