The Guest Cottage: A Novel 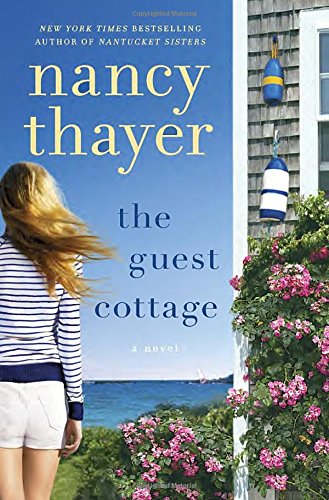 It’s summertime, so the living should be easy, right? Well, not so much for Sophie Anderson, the heroine of Nancy Thayer’s new beach book, The Guest Cottage.

After 16 years of marriage, Sophie finds herself at loose ends when her husband asks for a divorce. It seems that the fabulously wealthy, ex football star has been fooling around with his younger colleague. To give both herself and her husband time to consider whether splitting up is the best solution to their problems, Sophie taps into her inheritance to rent a beach cottage on the island of Nantucket from her hippie-in-need-of-money friend, taking their two children along with her.

Imagine her surprise to find another ex-football star and good-looker already established in the cottage with his five-year-old son! In the classic meet cute, it’s revealed that successful computer entrepreneur, Trevor Black, has also rented the cottage from another hippie cousin.

Neither cousin is available or contactable and neither Sophie nor Trevor can go home, so they make the obvious (to them, anyway) choice to spend the summer in an isolated beach house with a total stranger. The bulk of the story then revolves around their instant attraction and a will-they-or–won’t-they sexual relationship.

Various friends and relatives make their appearances to complicate things between Sophie and Trevor: substories about an abandoned music career and a heroin addicted dead wife come up now and again, and the obligatory miscommunications and misunderstandings occur, but the main issue is an inexplicable concern about a six-year age difference between the characters. Had they been younger, that might have made more sense, but in their thirties that difference seems negligible.

The Guest Cottage is a tepid romance novel, and it’s a shame. Thayer can clearly construct a sentence, and there are hints that this might have followed a more interesting track had she jettisoned the romance and focused on a mid-thirties woman in flux or a man dealing with the loss of his wife and its effect on their young son. As it is, whatever interesting possibilities exist are buried in weak dialogue, overuse of proper names, continuity problems, and a heroine who vacillates between acting like a stodgy matron and a giggly 17 year old. Character development is uneven, to say the least.

For lovers of light romance, the familiar elements are all there: instalove, imagined table sex, misunderstandings, weddings, and babies. None, however, are touched upon with any depth or even much enthusiasm. What little gusto Thayer musters is devoted to minute descriptions of clothing and elaborate meals. The island of Nantucket itself comes in for some informative description, maybe the strong point of the novel.

Of course, everything turns out fine at the end, there are a slew of nuptuals, and life is good for Sophie and Trevor (if not for the reader). Those who love Thayer or Nantucket might find something to interest them in the pages of The Guest Cottage; for the rest, it’s likely a cottage they won’t want to visit.