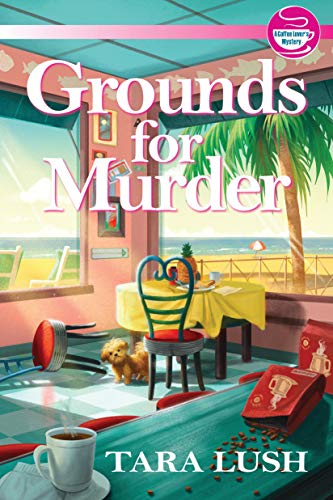 “In spite of a few weak spots, for those who enjoy a cozy with its fast read, this one works. All things considered—a good read for a chilly weekend indoors.”

Lana Lewis is lost. At least that’s what she thinks. She lost her job as a reporter with the Miami Tribune; she lost her high-profile husband to a woman 10 years younger than she. Now back at Devil’s Beach, Florida, operating her deceased mother’s coffee shop, Perkatory, she is looking forward to competing in the coffee competition, hoping she does not suffer another loss. “All my life, I’d wanted to succeed at something. Probably because . . . so much was expected of me.” Failure is not something Lana wants to experience again.

What Lana doesn’t anticipate, and a definite bummer to her goal to win the coffee competition, is the death of her coffee barista, Fabrizio (Fab) Bellucci, a man with a reputation as a womanizer.

Tara Lush introduces her lead character as one beset with drawbacks in her life. A good place to start, to allow the character to grow. Written in the first person, as most cozies are, the reader has the opportunity to ride inside Lana’s mind. And there is some humor in the first-person point of view, when we hear her use expletives such as “blergh” and “ugh” to describe an experience that can only appear in her mind, as when her ex shows up unexpectedly, “I pulled open the glass door to Perkatory and the first thing I saw was Miles, my ex. Ugh. He was a bout of instant indigestion and just as welcome.”

As all cozies have a second character for the protagonist to play off of—a friend or relative, it should be noted here that Erica Penmark—the new barista—is a strong female character and a good second to Lana and probably the coolest character in the story. “With her all-black, punk rock aesthetic, she stood out among the café’s décor . . .”—an unusual second and an engaging visual.

As with most cozies, the protagonist is at odds with the police regarding the victim’s death. Noah Garcia, the hunky police chief, whom Lana wants to know better, declares the death either a suicide or an accident, but she is convinced Fab was murdered. In most cozies, the death is a definite murder—stabbed, shot, strangled, whatever; but in Grounds for Murder there is nothing to indicate this was murder. Lush does very little to convince the reader why Lana believes otherwise. Of course, a cozy without a murder is a very short story, so Lana must prove her theory to Noah. Lana’s reporter instincts go into overdrive and she begins her own investigation.

So many suspects, so little time.

Lana realizes that Fab’s death also places her on the suspect list, after having a very public disagreement with him. In order to prove her own innocence, Lana must find someone else to take her place.

Mickey Dotson and his daughter, Paige, happen to be Fab’s girlfriend and Lana’s high school nemesis; they own the competition, “Island Brewnette;” and then there is the middle-aged married couple, Mr. and Mrs. Clark—the wife who has slept with Fab as the husband watches!

When Lana sneaks into Fab’s apartment above Perkatory to search for clues, she is interrupted by a mysterious man who is also searching for information. She hides but watches as he retrieves something, but what, and why is he in Fab’s apartment? She learns of his identity, Gary Leon Knowles, and tracks him down.

Lana and Erica corner Gary and discover that he retrieved sexy photos of one of Fab’s conquests—Gary’s wife, who was having an affair with Fab. Gary now takes top billing as a murder suspect.

Then, Lex Bradstreet, a friend of Fab’s—or was he? Associated with the local mafia, Lex moves to the top of her list when Lana discovers him calming Paige’s anxiety with a very sexy foot rub.

Lining up her interview candidates with some connection to Fab, Lana encounters Brittany Yates, the local mermaid tail maker, also a previous acquaintance of Fab’s. But the curious question becomes, what would her motive be? She doesn’t fit the bill but due to her previous relationship with Fab, she remains a character of interest.

And although Noah continues to warn Lana off her investigation, as any good cozy protagonist does, she remains convinced that Fab’s death was no suicide, and she pursues her investigation until it leads to the proverbial confrontation at the end of the book.

Three things should be noted, however, that weaken an otherwise strong story. First, that Lana’s reason to believe this was murder, is not strong. Her reporter’s instinct is just not enough to convince the reader.

Second, Lush brings Lana’s ex-husband into the story for a brief few pages, presumably to inject some conflict, but he doesn’t remain long enough to contribute anything of value to the story, and certainly is not a candidate for murder.

And third, every cozy that is worth the time to read will have a second story lurking in the background—and that is the main character’s romance with a handsome police officer, or newspaper man, or firefighter. It’s a given that this is part of the story, but in this case, Lana is so totally gaga over Noah, that barely a page goes by where she’s not admiring his strong arms, or his manly scent, or his beautiful eyes, or some other characteristic. This overkill takes away from Lana’s strength as the lead character.

Tension throughout the story is weak, but Lush does a good job of bringing strong tension to the end of the story during the final confrontation. She builds conflict throughout, particularly in scenes with Fab’s girlfriend Paige, but there is little or no conflict between Noah and Lana, except what is expressed in Lana’s mind. One-person conflict doesn’t usually work well, especially on a continuous display.

In spite of a few weak spots, for those who enjoy a cozy with its fast read, this one works. All things considered—a good read for a chilly weekend indoors.