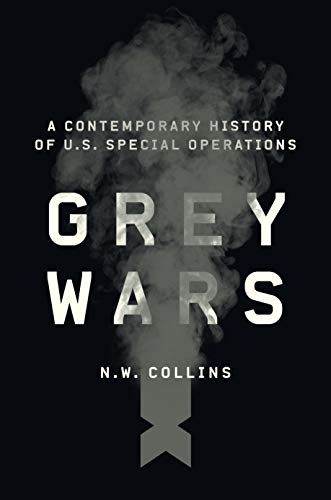 “For anyone wanting to understand how America has fought the ‘grey wars’ of the last 20 years, this book provides a unique introduction to how these units train, think, and fight.”

As the 20th anniversary of the beginning of the Global War on Terror nears, author N. W. Collins has provided a behind the scenes look at Special Operations Command (SOCOM), America’s premier front-line force in this new conflict without borders, a well-defined enemy, or an apparent end.

The author combines her observations from numerous interviews, embed visits, and other sources to provide an overarching analysis of the continuing shadow wars being fought by American troops throughout the Middle East with minimal oversight or even knowledge by the American people.

Beginning with the twin disasters of Desert One in 1980 and the Mogadishu raid in 1993, the author describes how these forces evolved into the primary fighting force and preferred weapon of America’s civilian and military leadership since September 11, 2001.

In particular, the symbiotic relationship between SOCOM and the U.S. Central Command, the primary combatant command charged with leading the fights in Iraq and Afghanistan since 2001 is described in detail, focusing on the heavy use of Special Operations forces to conduct hundreds of “raids” to kill or capture significant Al Qaeda and other terrorist leaders throughout this period, beginning in Iraq and continuing into Afghanistan.

While the American military strategy in both countries emphasized counterinsurgency and nation-building for most of the last 20 years, the nightly missions by Special Operations forces continued without rest, sometimes successful, but at other times creating collateral damage and casualties that made the overall mission more challenging since these forces often operated outside the conventional chain of command and did not always coordinate with local American or allied troops.

The author focuses a great deal of the book on the planning, execution, and aftermath of the Abbottabad raid that killed Osama bin Laden, remarking how the publicity from that operation brought out the previously quiet Special Operations community into the glare of publicity, creating unanticipated consequences when one of the operators from that mission published a quick battlefield memoir that became entangled in an extensive legal fight over whether the author violated his security clearance and disclosed classified operational information.

Unfortunately, that raid did not bring an end or even a slowdown to the mission tempo for these warriors, who soon found themselves entangled in the messy tribal and ethnic conflict in Afghanistan as part of the Afghan Surge begun in 2010. The author focuses on the shoot down of Extortion 17 in 2011, a Special Operations helicopter carrying 38 US and Afghan soldiers, all of whom are killed when the helicopter is brought down in the remote hills of Afghanistan during another of the nightly raids that had become almost common affairs. The loss of so many troops in one mission, as the author notes, highlights both the risk of the missions and the enduring willingness of the US at the time to accept these casualties as part of the Afghan Surge, with operations continuing without interruption.

In the end, the author observes that these forces continue to operate around the globe, serving a significant political and diplomatic purpose, with dozens of countries represented at the Central Command headquarters as participants in the war on terror and numerous Special Operations forced deployed around the world to provide training and operational advice to countries fighting their own internal wars against terrorist groups. For anyone wanting to understand how America has fought the “grey wars” of the last 20 years, this book provides a unique introduction to how these units train, think, and fight because, as the author concludes: “SOCOM’s work is unorthodox, ambiguous, and unending.”