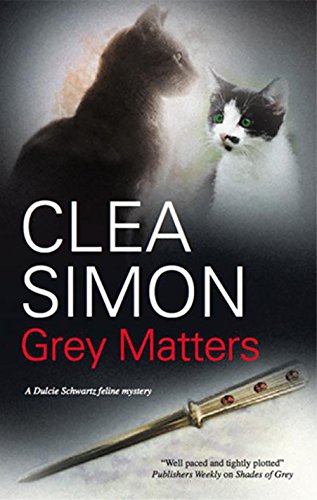 Reading the existing blurb, which uses phrases like “cozy mysteries” and “feline cozies,” and perusing the beginning of Clea Simon’s latest book—which has Dulcie Schwartz trying to get her kitten to talk to her—the reader could be forgiven for thinking that this is yet another “novel” which should never have been written. The academic Schwartz would, herself, question the definition of the word “novel” in the context of murder mysteries such as Grey Matters.

Nevertheless, while Clea Simon is certainly no Virginia Woolf, nor an Annie Proulx , she is nevertheless admired by her loyal readership and this, in itself, constitutes endorsement of a writer’s work.

Dulcie Schwartz is not a modern Miss Marple, nor is she, heavens forbid, another Jessica Fletcher. She occupies a unique niche in the regiment of nosy, busybody, female would-be detectives: she is a third-year Harvard grad student of eighteenth century gothic novels and, as such, brings a higher intellectual dimension to this prosaic genre. The narrative voice is accomplished, measured, and professional. The style is über-descriptive, painting baroquely elaborate word-pictures of places and people and even thought processes.

There is something that is vaguely Austen-esque about Clea Simon’s writing in its use of carefully structured sentences and grammatically fastidious prose. The story is littered with college-speak and arcane Harvard references that, although intriguing, can sometimes detract a little from the plot line and seem intentionally tutorial in tone. The characters are meticulously drawn, down to the last detail of wrinkle, stray hair, and facial expression.

The murdered body of grad student Cameron Dessay is found by Dulcie Schwartz on the doorstep of her professor’s—and thesis advisor’s—townhouse, in the Ivy League precinct of Cambridge, Massachusetts. It looks like premeditated murder, and it also looks like Dessay knew his killer. The fact that she found the body obsesses Dulcie, and she’s determined to get to the bottom of what’s going on. She is hampered by the seemingly deliberate obtuseness of the people around her.

Dulcie looks for guidance to the spirit of her dead cat, Mr. Grey, who provides her with enigmatic clues and feline reassurance along the way. Mr. Grey is in the process of handing over his role as advisor to Esmé, Dulcie’s new young kitten. Incidentally, Dulcie comments on the stench and stain of tobacco in her professor’s rooms, and one can’t help but wonder if there is an equivalent stench and stain of cat urine in her own rooms, as her kitten seems to be left alone for long periods of time.

Dulcie is also engaged in other “detective” work: trying to establish the authenticity of the subject of her thesis, an 18th century gothic novel called The Ravages of Umbria. She is worried that her professor is in the process of stealing her years of work to bolster his own flagging reputation.

Campus relationships complicate things further, along with a break-in at the professor’s house and characters such as a lupine book binder and a beautiful young undergraduate student. The story continues at a slightly pedantic pace, with regular repetition of facts, and I found myself reading on auto pilot at times in order to reach a more interesting and more relevant passage.

The resolution, when it finally comes, is in contrast to the leisurely pace of the exposition. It is unexpected and a fitting denouement to the plot.

As is inevitably with this genre, all loose ends are tied up fairly convincingly and a sense of achievement is experienced by the exhausted heroine. Little leads are left for the next installment, and the Dulcie Schwartz feline mysteries will undoubtedly become a series to rival Clea Simon’s previous Theda Krakow mysteries.

Ultimately, perhaps like Harvard itself, Grey Matters lives somewhere cerebral, above mere storytelling, in a lycean realm of excruciating whys, wherefores, and if-onlys.