Gretel's Story: A Young Woman's Secret War Against The Nazis 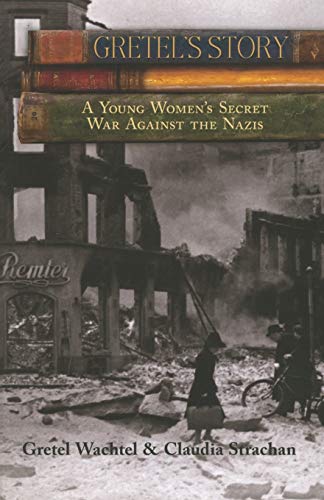 “[Gretel Wachtel’s] defiance of the Gestapo and her willingness to serve time in a concentration camp gives Ms. Wachtel special status, similar to others like Oskar Schindler: those who are considered ‘Righteous among Nations.’”

Gretel’s Story is the tale of a young woman living in Hamburg, Germany, during WWII. This memoir of Gretel Wachtel reveals her feelings and thoughts about parts of the devastation of WWII, and about how she experiences the destruction of her beloved city and the beginning of the vast genocide against the Jews in Europe.

Through Ms. Wachtel’s eyes, we feel the devastating results of the constant bombing of Hamburg by the Allies, a stark reminder of the collateral damage and devastation of modern warfare. While we rightfully think of Hitler’s primary civilian victims (Jews, Roma, mentally retarded, homosexuals, political prisoners, etc.) as the real victims of WWII, hundreds of thousands of innocent German citizens also succumbed to the devastation of contemporary warfare, particularly the carpet-bombing of German cities such as Dresden and Hamburg. This perspective forms the central focus of Gretel’s Story.

Ms. Wachtel is a liberal, free thinking young woman who has no fear of speaking her mind—even when it is against Germany’s military conquest over Europe. She makes no bones about abhorring Hitler, Germany’s subjugation mentality, its bigotry, and its hostility toward Jews and other minorities. A careless anti-Nazi comment results in Ms. Wachtel’s forced labor in an ammunition factory; however, she never loses her desire to fight the totalitarian regime. This is the story of a strong young woman who fights hard against social injustice. Ms. Wachtel is open minded in many ways—including her sexual behavior. Eventually, she marries a resistance fighter, although she does not love him. Ms. Wachtel helps a Hamburg priest protect innocent people persecuted by the Gestapo. She begins a series of dangerous humanitarian tasks by hiding her Jewish doctor in her own home. While working for the Wehrmacht, she passes military secrets to the resistance. Her primary motivation in all of her endeavors is to help innocent people placed at peril in Nazi Germany.

Perhaps Ms. Wachtel’s most successful method of survival is to sell blackmarket goods. During the war years, she connects with important figures inside the Third Reich, in her own community of Hamburg, and within the resistance—all of whom are committed to fighting the tyranny of Nazi Germany’s annexation of Europe and the growing genocide. At one point she is supervised by members of the Stauffenberg Hitler assassination plot. In one of the book’s most poignant moments, Ms. Wachtel cares for her family’s Jewish physician who has become a fugitive under Nazi rule. Near the end of the war, in 1945, Ms. Wachtel is sent to an internment camp.

Gretel’s Story is well written, succinct, and concise. Several individuals might have deserved more powerful character development, especially her mother, the Hamburg priest, and the Jewish doctor that she saves (at least temporarily). But the personality of the protagonist is clearly explored. And the circumstances surrounding the devastation of Hamburg by Allied bombing are very clearly established. The reader comes away with some sympathy for the average citizen of Hamburg who saw his or her beloved city flattened by bombing.

However, this book does not address the massive genocide that occurred in Nazi death camps. We hear about, but fail to see evidence of, the murder of European Jews, Roma, the mentally retarded, political prisoners, and others who were remanded to Nazi death camps. One can sense a desire for justice in the author and her colleagues, but the sheer magnitude of genocide in the telling of this story is only hinted at.

Gretel Wachtel, like so many other righteous people, was catapulted into heroic behavior because of extraordinary circumstances. Her strength of character and purpose helped her to defy Nazi dictates that not only led Germany down a path into darkness, but also helped her to save innocent victims of war. Her defiance of the Gestapo and her willingness to serve time in a concentration camp gives Ms. Wachtel special status, similar to others like Oskar Schindler: those who are considered “Righteous among Nations.”