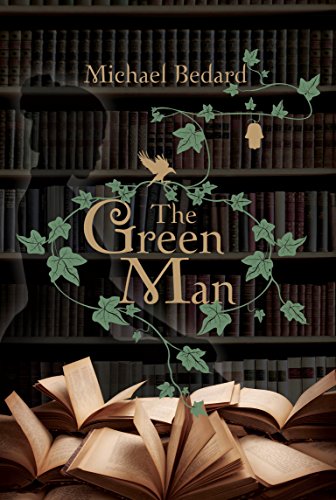 “Mr. Bedard masterfully interlaces the real with the supernatural . . . , evoking a sense of myriad magical possibilities.”

What 15-year-old could resist the prospect of spending a summer helping an odd, elderly aunt run her dusty secondhand bookstore in some poky village? That’s the grand vacation plan for the tragically named Ophelia, who insists upon being called “O.”

Aunt Emily’s seemingly mundane world, however, reveals a maze of old secrets that will demand O’s acuity to decipher.

As soon as she settles into her room upstairs, she encounters mysteries, as she hears footsteps outside but sees no one and smells roses where vines do not grow. In the process of getting to know her father’s sister, who’s recovering from a heart attack, she becomes pulled more and more into Emily’s past and into her own future as a poet.

O observes her aunt, a published poet, has a “touch of the otherworldly about her.” Her quirky, sensitive nature has shaped the contents of the Green Man bookstore, where the poetry section is “the beating heart of the collection.” Other shelves hold volumes devoted to Victorian stage magic and to supernatural fiction. That interest in magic, in fact, has its roots in a terrifying childhood experience that comes tearing back to haunt Emily.

The specter of an evil magician returning to destroy another life will lure readers into the novel’s eerie core—if only they can get past all the puttering. Oddly enough, the author spends an inordinate amount of time describing tedious chores such as sweeping, scraping, shelving, and dusting. Like O, the reader must somehow overcome the clutter in order to unearth the significant.

While the Green Man does not play an active role in the plot, as readers might rightly expect, Mr. Bedard taps its symbolic nature to illustrate how the past and present commingle. Since 16th century in England, the Green Man has made his appearance as a savage dressed in green leaves, with an ivy garland on his shaggy head. Carrying fireworks, he would keep the path clear for a procession, which typically occurred in the spring.

Inspired by such associations, Emily explains to a customer what the figure means to her: “[The Green Man] stands at the doorway between worlds. Life springs from him, all green and growing. But that life is rooted in darkness, as all life must be.”

While O devotes her energy to revitalizing her aunt’s business—freshening displays, arranging for poetry readings, and restoring the shop’s faded sign—she makes peace with the quiet ghosts of poets that make themselves at home among the teeming shelves.

Ezra Pound comes to lounge on the couch and pet the cat; Mallarmé plants himself on the stairs, “ his plaid shawl draped over his shoulders, his pen poised over a scrap of closely written manuscript on his knees.” Mr. Bedard masterfully interlaces the real with the supernatural in these passages, evoking a sense of myriad magical possibilities.

One particular possibility shows his handsome, unkempt face at the Green Man. It seems O has found a friend in this likable teen with a penchant for poetry. Is it just a coincidence he bears a remarkable resemblance to Rimbaud? Both readers and O must wonder: Is he a ghost? Is he homeless? Or is he in league with the dangerous magician?

Poetry ties O both to the mysterious boy and to her aunt, whom she comes to appreciate and understand. She learns Emily has paid a high price for her poetic journey, as her inspiration sprang from the long-ago encounter with the magician. The niece willingly shares her aunt’s awareness of the dual nature of imagination and asserts its value by cultivating her own writing. Together the two will confront the terror that finally arrives that summer.

Mr. Bedard’s earlier novels on Emily, A Darker Magic (1987) and Painted Devil (1994), as well as his picture book about Emily Dickinson, illustrate how the past lives on in the author’s imagination. Nonetheless, one does wish he would consider that in desiring to demonstrate poetry’s power to behold both past and present, good and evil, one must leave the specks of dust where they lie.