Green Lantern: A Celebration of 75 Years 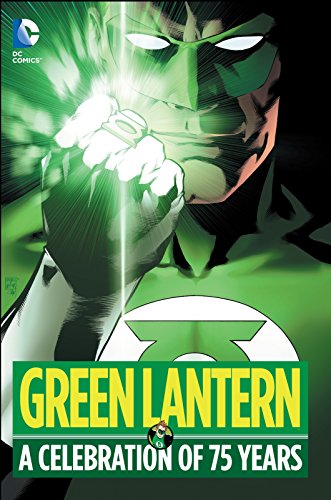 For 75 years, members of the intergalactic police force known as the Green Lanterns have been taking readers and science fiction fans from one end of the galaxy to the other.

Who wouldn’t want to be able to fly through endless miles of space with a ring that can bring to life anything that you could imagine? That includes oxygen to keep you breathing in space!

DC Comics’ newest compilation in their Celebration series, Green Lantern: A Celebration of 75 Years, makes it clear that the story of the Green Lanterns is one of the great space sagas of all time. A good GL story holds as much adventure, excitement, and character complexity as anything that populates the worlds of Star Wars, Dr. Who, or Lord of the Rings.

This anthology gathers together stories of honor and heroism that reach from a subway platform to the farthest ends of the universe. Each one features art from many of the best to ever draw a comic page. Gil Kane, Carmine Infantino, Ethan Van Scriver, Darwyn Cooke, Keith Giffen, Neal Adams, and Doug Mahnke are just some of the artists who have made their impression on Green Lantern over the years.

This anthology tells the story of the very different people who have worn the Green Lantern’s power ring over the years. Like actors inhabiting the character of James Bond, The Guardians of the Galaxy have given several different characters the Lantern’s ring. But before the story moves into space, it starts right here on Earth.

The origin of the Golden Age Green Lantern is a mixture of Aladdin’s Lamp, various pulp influences, Greek mythology, and a few other details. First appearing in All-American Comics #16 (July 1940), the character immediately becomes one of the biggest of the time. His colorful costume is part carnival barker and part mystic seer and is so popular that he is featured in a third title with Wonder Woman and The Flash. Three stories from this early era are selected for inclusion.

As heroic as and beloved as the first GL is, by 1948 superheroes are fading in the public’s interest. The original Green Lantern sees his book taken over by a dog named Streak.

It is with the 1959 rebirth of Green Lantern that everything really begins to take off. With the 1956 reinvention of The Flash selling like wildfire, DC Editor Julius Schwartz decides to bring back GL. He, his artists, and his writers all have strong backgrounds in science fiction and the pulps. This makes a big difference in the new GL origin story.

Schwartz, working with writer Robert Kanigher and artists Carmine Infantino and Joe Kubert, creates a Green Lantern for the dawn of the space age. In his secret identity as Hal Jordan, Green Lantern is now a cool test pilot out on the West Coast. Like the times in which he first appears, Jordan is bold, brash, and completely sure of himself.

Green Lantern is a hit out of the gate. Soon writer John Broome and Gil Kane come on board and, in the next few years, the comic hits a series of highly imaginative science-fiction based peaks. Broome creates concepts and characters which will continue to inspire others for decades to come.

In just a few issues we meet The Guardians of the Galaxy, the small blue men from the planet OA who lead and power an intergalactic police force known as the Green Lantern Corps. In Green Lantern #7 (August 1961) we meet his greatest villain, Sinestro. In time Broome would reveal that Sinestro was indeed infected with the virus of power.

Over 40 years later this sets up one of the greatest GL stories of the modern era, Blackest Night in Green Lantern: Rebirth #1 (December 2004). (Also reprinted in this anthology).

In another Silver Age classic, The Secret Origin of the Guardians (Green Lantern #40 October 1965), Broome writes a sweeping 24-page story that gives us the origin of the Guardians, brings back the Golden Age Gl, showcases the GL Corps and features a villain who sets in motion events that would later reshape the entire DC Universe in the 1985 series, Crisis on Infinite Earths. The issue is also a prime showcase for the athleticism and power that artist Kane brought to Green Lantern.

The spirit of the late sixties seemed to open the eyes of America to the reality of life in this great country. That spiritual, social and cultural awakening fuels No Evil Shall Escape My Sight from Green Lantern #76 (April 1970).

Teamed with a new, politically aware Green Arrow, GL starts to see that his country may be falling apart from the inside. Written by Dennis O’Neil and drawn with boundless energy by Neal Adams, the story brings poverty, racism, the concept of social responsibility and much more right into GL’s lap.
In the eighties and into the early nineties, Hal Jordan, once the greatest of the Lanterns, sees his home town of Coast City destroyed before his eyes. In response he simply cracks, killing other Lanterns and, eventually, most of the Guardians themselves.

Those dark times leads to a new, brighter era. In 2005’s story Flight by Geoff Johns and Darwyn Cooke, the saga of Hal Jordan and the Green Lanterns returns to the wonder of being a kid again. With art filled with the sunlight of the desert and the darkness of the sky, we once again feel the wonder of the future. Just like we first did in Showcase #22 (October 1959) when the Silver Age Green Lantern first appeared.

In 20 stories that span the ages, Green Lantern: A Celebration of 75 Years gathers the absolute best of GL.