Green Arrow: A Celebration of 75 Years 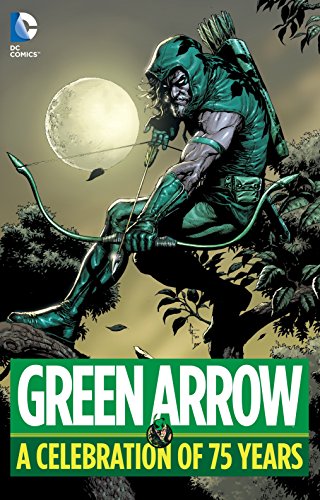 For Green Arrow: A Celebration of 75 Years, publisher DC Comics has dug through their massive vaults to find the perfect summation of the life of Oliver Queen.

Once consigned to back-up features in DC’s major titles such as Action Comics (home of Superman), Green Arrow has emerged to become a major player in the world of comic books.

He began as a brightly-colored battling bowman who, some feel, was a little too close in style and content to Batman for his own good. Seventy-five years later Green Arrow has transcended his simplistic origin in the Golden Age of comics to become one of comic book’s greatest success stories and most popular characters.

Highlighting the artistry and writing of such giants as Jack Kirby, Neal Adams, Geoff Johns, and Amanda Conner, the collection charts the long and often torturous path that occasional millionaire Oliver Queen, (GA’s secret identity), took from Batman clone to superstar of modern comics books as well as a star on the CW Television Network.

The 1938 debut of Superman in Action Comics #1 (June 1938) started a tidal wave. By 1941 the comic book industry was in full swing. At DC, they were on a hot streak. They had not only the man from Krypton as well as Batman, they also published The Flash, Green Lantern, The Justice Society of America, and were just getting ready to unveil Wonder Woman.

The company asked Mort Weisinger, editor of the Superman and Batman titles, to develop a couple of more heroes. In quick succession he came up with Johnny Quick, Aquaman and Green Arrow. The last two made their first appearance in the same issue, More Fun Comics #73 (November 1941).

In that first appearance the similarities to Batman are impossible to ignore. Green Arrow was a millionaire in his secret identity. He also had an Arrow-Car, an Arrow-Cave and a bright, colorful, wisecracking sidekick.

With strong art by George Papp, GA’s debut shows him hitting the floor running. He was quickly made part of DC’s second attempt at a superhero team, The Seven Soldiers of Victory. Writer Harlan Ellison once described this little remembered group by saying, "Before the Magnificent Seven, there was the Seven Soldiers of Victory; even more so than the Justice Society (which I adored), I loved this bunch.”
Reprinting GA’s first adventure with the group, the collection moves into his 1943 origin story followed by Jack Kirby’s 1959 take on the story. It is Kirby’s run that came to define GA in the fifties and early sixties. The legend more than lives up to his reputation in this origin story.

Then, in The Brave and The Bold #85 (September 1969), writer Bob Haney and artist Neal Adams say goodbye to the two-dimensional heroics of the Golden Age in an explosive story that drops Green Arrow straight  in modern times. Teaming with Batman, GA not only debuts a new costume inside “The Senator’s Been Shot,” but for the first time a liberal, screw the establishment ideal moves to the center of his being.

It was a profound shift in a character’s emotional make-up during a time when the country was changing faster than its citizens could deal with. In many ways the reshaping of GA that started with in B&B #85 was the end of the Silver Age of comics.

Then Green Arrow profoundly changes the DC Universe. Dropping out of society proper and suffering severe financial setbacks, GA takes off to discover America with his friend and near-political opposite, Green Lantern.

Writer Dennis O’Neil and artist Adams created a series of stories for the two heroes that took on issues which had never been discussed in comic books before. Racism, poverty, hunger, corporate greed and drugs all took center stage in their stories.

The most memorable is “Snowbirds Don’t Fly” from Green Lantern/Green Arrow #85 (September 1971). Adams’ brilliant art for the cover shows GA’s once youthful ward Speedy having just  himself full of heroin, his needle, spoon and complete works sitting right there front and center.

It was a revolution in comics.

Comics were different after the team’s trip across America. Marvel was doing their own fair share of moving the bar forward, but no one at the time served a character with such specificity, directness and emotional beauty as O’Neil and Adams did during this period.

Now a major player in the DC Universe, the eighties see Mike Grell reshaping the character to match the times. He moves GA into a world of shadows and the orient while broadening the character’s supporting crew with fully realized characters.

The third section of this collection ends with GA’s death as Superman races from an exploding plane. In 1994 his son Connor Hawke takes up the mask and becomes the second Green Arrow.

Two thousand one saw filmmaker Kevin Smith pick up torch and move the original GA into a new century. Once again his lifelong paramour and fellow creation of the Golden Age, Black Canary, is by his side. In 2002 New York Times bestselling author Brad Meltzer writes GA’s 2002 storyline “The Archer’s Quest.” By 2006 Andy Diggle and Jock are creating an origin for GA which leads to him becoming a TV star in the real world.

The editors are experts at condensing certain plotlines (such as GA’s 1995 death) so that the new reader walks away with a clear understanding of the action. They have chosen stories which not only highlight the incredible career of Oliver Queen, but stories which emphasize the effect that society and social mores which have guided GA ever since the work of O’Neil and Adams in the seventies.

This is one of the most greatest and enjoyable biographies in comic history.