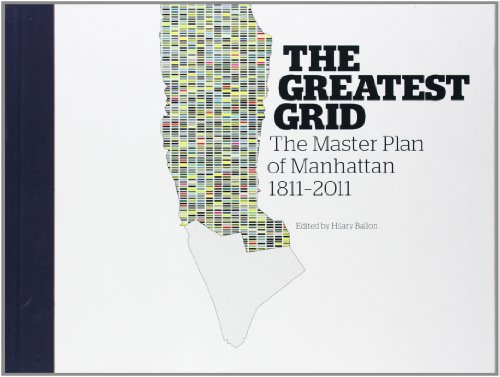 “A must read for anyone and interested in places and how they affect all parts of our lives and cultures. The Greatest Grid calls the reader to browse randomly. Read straight through or study carefully. Just as New York leads global society in many ways, its leaders’ collaboration in producing The Greatest Grid will hopefully inspire leaders of other grand venues to tell their placemaking stories with comparable flair, panache, and majesty.”

What makes a great urban place?

Does do-your-own-thing planning lead to independence and innovation? Or to chaos and conflict?

Does ordered, controlled, structured arrangement of the physical form squelch spontaneity and suppress creativity? Or does the explicitly defined system of physical planning enable free expression and promote efficiency?

The answers to these questions—and many more—are offered up between the covers of The Greatest Grid: The Master Plan of Manhattan, 1811–2011, produced to coincide with the bicentennial celebration of the promulgation of the plan that defined, directed, and inspired the evolution of one of the greatest cities on earth.

Indicative of the stature, reach, and majesty of the place studied here is that the esteemed editor Hilary Ballon, as the Deputy Vice Chancellor of New York University Abu Dhabi, is based in New York City, while serving in a leadership role to establish a campus in that Middle East place, as part of the NYU initiative to further its global university identity.

The Greatest Grid chronicles the vision, scope, parameters, process, and consequences of imposing early in the 19th century a structured grid-based planning model on Manhattan Island, mandating unvarying repetitive rectangular blocks, 200’ from street to street in north/south direction and 610’ to 920’ between the avenues running east/west, with cross streets 60’ wide, periodically punctuated by 100’ wide major cross streets, accommodating both crosstown traffic and commerce, in contrast to the residential character of the narrower, non-crosstown streets.

The plan was motivated to stimulate and accelerate New York’s emergence as a great city. Evidence of the ambition and intervention of the plan is that some 39% of pre-grid structures were required to be demolished.

In 1810, a time when both London and Peking had populations exceeding 1,000,000, New York’s population was 96,373—which the plan envisioned, more than quadrupling, to 400,000 within a half century. Indicative of how the plan accommodated the anticipated growth is that this goal was less than half the actual 1860 New York population of 813,669.

Reflecting on the power of the grid, Rafael Vinoly, who has practiced architecture in New York City for nearly a half century, observes, “The Manhattan grid is sort of the E=MC2 of planning. It is a unified formula that controls and organizes the forces that make the city what it is, what it was, and what it will become; the explanation of this genius; the best manifestation of American pragmatism in the creation of urban form.”

This book is especially important at a time of the rediscovery of place primacy, the renewal of preference for urbanity, and the profound societal shift of more people globally living in cities than in the country. The text conveys the city as an intricate, interwoven, interdependent fabric of creativity and interaction.

The editor favorably comments concerning Jane Jacobs’s interpretation of “the streets as positive space constituting the essential public realm of the city. In contrast to a long tradition of urban critics who equated urban design with free-standing monumental buildings, Jacobs saw the strength of New York not in its signature icons but in lively, ordinary streets with people chatting on busy sidewalks.”

The Greatest Grid eloquently and elegantly reinforces the fundamental principle of systems—applicable in multiple contexts, including personal self-management and relationships—that creativity plus the ad hoc can lead to chaos, while creativity plus structure can lead to innovation.

Today, Manhattan inarguably is one of the most creative places anywhere, as reflected by the arts, finance, business models. That said, “the grid affects almost all aspects of urban life. On paper, the plan defined the surface of the city—the widths of the streets and the edges of the lots—but in reality, its orthogonal structure governs everything that occurs on, above, and below that surface as well. Infrastructure and architecture make the grid; utilities, transportation networks, and social patterns follow it.”

The generous 9” by 12” scale is fully appropriate for such a big topic. Colored tabs separate and facilitate locating sections covering Manhattan before the grid, the essential elements of the Commissioners’ Plan of 1811, surveying the city and opening streets, the sales process from land to real estate, developing different sections of Manhattan, and several contemporary topics.

The presentation reflects high production values, whose images are, individually and collectively, works of art. Among the numerous striking images are the 1811 map of the Commissioners’ Plan and a most fascinating 1921 aerial view of New York City.

Employing a full array of visual tones: soft and hard; color, black and white, and sepia; presenting ideas, philosophy, ideals, values, personalities, laws, tools, and reflective commentaries through a collection of many voices—ranging from the promotional to the controlling, advertisements to the “Text of Act Establishing the 1807 Street Commission,” politicians to scholars—The Greatest Grid captures the true yin and yang of New York City. In so doing, this book tells the story of placemaking.

All who live in, interact with, and/or have in interest in New York City—really, in great cities anywhere—will be well rewarded by spending time with The Greatest Grid. Further, this is an essential resource for those considering committing their time and money to New York commerce and/or place experiences. A must read for anyone and interested in places and how they affect all parts of our lives and cultures.

The Greatest Grid calls the reader to browse randomly. Read straight through or study carefully. Just as New York leads global society in many ways, its leaders’ collaboration in producing The Greatest Grid will hopefully inspire leaders of other grand venues to tell their placemaking stories with comparable flair, panache, and majesty.