The Great Stagnation: How America Ate All the Low-Hanging Fruit of Modern History, Got Sick, and Will (Eventually) Feel Better 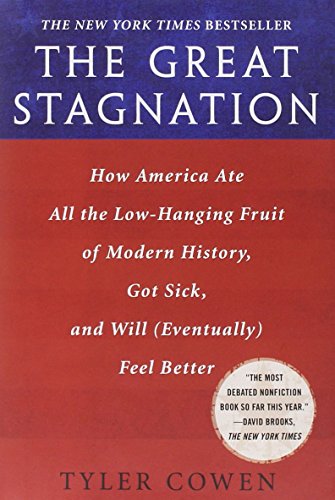 The essence of the argument that Tyler Cowen advances in The Great Stagnation is that the U.S.’s prosperity over the last three decades has been derived from “lots of low-hanging fruit . . . free land, lots of immigrant labor and powerful new technologies. During the last 40 years, that low-hanging fruit started disappearing, and they started pretending it was still there. They failed to recognize that we are at a technological plateau that the trees are more barren than we’d like to think. That’s it. That is where it’s gone wrong.”

Most importantly, he recognizes that innovation is neither easily predicted nor particularly well understood, noting, “Yet we made our own plans and maintained our old institutions with the understanding that our life would be a lot like the old except it isn’t.”

Author Cowen observes, “You can be an optimist when it comes to our happiness and our personal growth yet still be a pessimist when it comes to generating economic revenue or paying back our financial debts.”
Described in promotion copy as “the e-special heard round the world that ignited a firestorm of debate and predefined the nature of our economic malaise,” is simultaneously provocative in its thesis and problematic in its analysis.

One very positive feature of The Great Stagnation is that it is succinct, accessible, without sacrificing sophistication. As stimulating as is his diagnosis, and as intriguing as are certain of his analyses, overall his arguments are less than persuasive. Had the author had more insights on the implications of place choice and also had the author been more exposed to implication of place choice generally and the innovation growth engine centered in Silicon Valley, he might have reached a very different assessment and written a very different conclusion.

Unpacking the three pillars of Dr. Cowen’s low-hanging fruit argument, while initially certain land incentives were offered, for the last century not much land has been free. Further, the land that was free was in the country and not in the cities, which is where the vast majority of the country’s productivity is concentrated and where the country’s growth has been. To say immigration has declined over the last several decades is less than accurate.

Tyler Cowen asserts that after six decades of innovation concentrated during the 1880 to 1940 period, technological breakthroughs have stalled. Answering in the negative his question, “Does the Internet change everything?” he writes, “The new low-hanging fruit is in our minds and in our laptops, not as much as the revenue-earnings sector of the economy.” Consistent with traditional economic thinking, Dr. Cowen perceives that jobs and household incomes are the relevant measures of economic progress. As important as are jobs and household income, entrepreneurs, senior executives and investors might view this circumstance through a very different lens.

For those with a financial stake in the profitability and value of entrepreneurial and corporate enterprises, achieving more revenue and more people with fewer people is a positive rather than a negative outcome. Successfully doing more with less, is valued by those very individuals whose decisions will be the source of any jobs that will be created.

Here, like the vast majority of policy leaders and economists, Tyler Cowen persists in employing a framing that diverges from the objectives employed by those whose decisions ultimately determine whether jobs are created or not created.

Looking ahead, the author advances the important recommendation to “raise the social status of scientists,” asserting, “If we are going to perceive further major technological breakthroughs, it is a big help if people love science, care deeply about science, its sense attracts the best American and foreign minds.”

While enhancing the social status of science is certainly a meritorious recommendation, advancing this priority as the dominant solution to the profound challenges of the times is simple minded and simplistic. Not only are American society’s problems so much more complex, nuanced, and daunting than can readily be resolved by righting the lack of emphasis of science in society, but scientists also generally do not pursue problems the solutions to which offer the prospects of major economic advance in the near future.

Further, what may be fixed as a result of their research may not be those elements found most critical to stimulating the imperative economic growth to pay debts of the past, fund continuing public sector deficits, and support necessary investments in education and infrastructure, especially mass transit.

In his chapter exploring, “Why do we have such a big financial crisis?” Tyler Cowen provides an eight-word answer: “We thought we were richer than we were.” While this statement is accurate, by no means is it a fully developed articulation of the sources and consequences of the financial crisis. He labels housing and subprime loans as “the proverbial canary in the coal mine,” for “the real problem was that investors took on too much risk across the board.” Why there was excessive risk taking is not addressed.

This could inspire an economics course final examination:

The very title of Tyler Cowen’s highly influential blog, The Marginal Revolution, suggests a predisposition to thinking anchored in continuity rather than recognizing the profound implications of discontinuity, even hyper-discontinuity. Perhaps this follows from one of the challenges unavoidably encountered by Tyler Cowen and other economists who live and work close to Washington, DC—George Mason University in Virginia, where he is Professor of Economics, is only 15 miles away from the nation’s capitol—is that they are unconsciously seduced to adopt a world view of economics dominated by traditional incrementalism rather than innovation.