Great Soul: Mahatma Gandhi and His Struggle with India 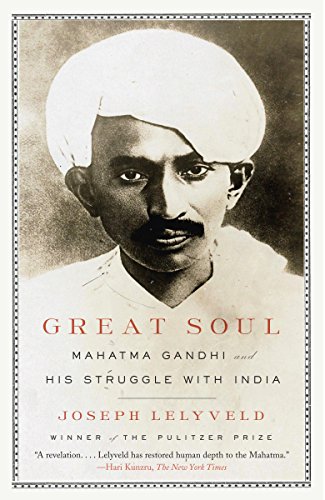 There has not been a definitive biography on Mahatma Gandhi for many years. This is made even more compelling because India, the country that he helped usher in as a modern entity, is now, 63 years after his death, emerging as a world economic super power. Having said that, what has Joseph Lelyveld’s work, Great Soul, added to the literature on Gandhi scholarship, and how has it advanced the scholarship of Gandhi’s influence on modern India?

Mr. Lelyveld is a meticulous storyteller, but more importantly he is able to define with a historian’s eye through rigorous research the development of Gandhi as an individual, a leader, a mystic, and a politician.

The analysis is made even more compelling as he traces the trends in Gandhi’s life from his beginnings as a barrister in South Africa through the multitude of his campaigns in India on issues ranging from celibacy, to his concern for the untouchables and caste politics, the rapprochement with the Muslims during Gandhi’s lifetime, and ultimately the quest for independence from Britain.

In the process, Mr. Lelyveld reveals his vision of the real Gandhi, warts and all. Mahatma Gandhi was a complex man with many great inconsistencies ranging from an inherent streak of stubbornness to his personal need to straddle the spiritual and political worlds.

Of particular interest here for example, was his quest for celibacy throughout his life which caused him to be estranged from his family, and ultimately resulted in a hint of scandal towards the end of life when he, like King David in the Bible, used his young niece to keep him warm—and help him to continue working on resisting the temptation of overt sexuality.

Other factors related to Gandhi’s tendency to straddle great historical issues were the role that he played between Hindus and Muslims in pre-schism India when in order to forge an Indian identity he sought to support Muslim demands for a Caliphate, similar to the current wishes of Al Qaida, at the expense of radical Hindu demands to maintain Hindu religious purity. The final touchstone in this process of Gandhi’s moral certainty was his willingness to promote spiritually the demands of India’s lower caste untouchables in the face of concerns raised by the upper caste Hindus who were not willing to condone a rapprochement or even an openness to the historically lower castes In Indian spiritual and political life.

Finally, as noted previously Mr. Lelyveld expends considerable effort in capturing the Mahatma’s stubbornness. For example, toward the end of his life with the premonition of his death ever present in his mind, Gandhi as in other occasions throughout his life, insisted on fasting and trekking in one last ditch attempt to maintain an Indian unity between the Hindus and Muslims even during the intense rioting that led to the separation between the two religions and the formation of the separate political entities of Pakistan (East and West), and India proper.

Joseph Lelyveld’s touch portrays Gandhi with admiration, but does not cease from expressing a perceived annoyance with Gandhi’s foibles and inconsistencies. Where the book breaks down for this reviewer is in Mr. Lelyveld’s tendency to dwell at length on these foibles such as the emphasis on celibacy that though they contribute to the narrative on certain occasions seem to detract when expressed in the fulsomeness of detail throughout the book from the more robust trends in Gandhi’s life and circumstance—such as a fuller explanation of his influence on the new generation of Indian leaders extant at the time such as Jawaharlal Nehru.

Further, there are times when Mr. Lelyveld gets caught up with the
minutiae of Gandhi’s life, for example with the internecine struggles in
South Africa and India, when Gandhi developed his own Ashrams by
committee, while maintaining a distance even from the personal purity of
his causes. Finally, it would have been helpful to see from Mr. Lelyveld more of an expressed dynamic analysis of how Mahatma Gandhi has relevance to modern day India. There is no doubt that the Mahatma’s force of personality made him the spiritual leader for Indian independence, but based upon Mr. Lelyveld’s description, did he ever accomplish what he truly sought in his life?