Great Soul of Siberia: Passion, Obsession, and One Man's Quest for the World's Most Elusive Tiger 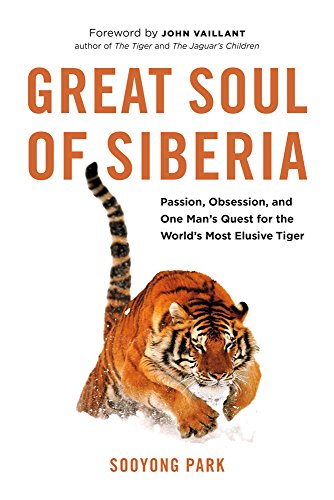 “a fantastic example of literary nonfiction, of science and field research combined with beautiful narrative . . .”

Knowledge of Siberian tiger habits and lives is rare because of their elusiveness, but Sooyong Park took it upon himself to live in a bunker for good swaths of the year in subzero temperatures in hope of a glimpse of these beautiful and rare tigers. Park’s patience paid off, and he managed to compile enough data, memories, and footage for several documentaries and this book, Great Soul of Siberia, which is an ode to the Siberian tiger as much as it is an account of Bloody Mary’s family and the three generations after her in the Ussuri Forest.

Park has been studying Siberian tigers for two decades. In this book, he documents the lives of Bloody Mary, her mate Khajain, and their offspring—White Moon, White Snow, and White Sky. Bloody Mary is named for her meticulous kills: Not only does she puncture the deer and boar at their throats, she adds a second set of puncture wounds to ensure they are dead, and there is always a lot of blood left behind.

Threatened by poachers with extinction, the population of Siberian tigers is down to just a few hundred, and the indigenous Ussuri, who worship tigers, calling the strongest male the Great King, have seen their own population and culture decline as well.

Great Soul of Siberia is a poignant tale. Readers witness the deaths of Bloody Mary and one of her cubs, as well as the death of Bloody Mary’s grandson Kuchi Mapa and the mourning of White Snow as witnessed by her pacing foot prints and the depth of digging as she tried pushing him back onto his feet with her snout.

Park doesn’t just stay isolated in his bunker, thwarting madness, living on barely thawed rice balls and silence except for the falling snow—he gets out into the forest and tracks prints and claw marks, droppings, and the remains of prey. Nowhere can a reader get closer to feeling the stiff brush of a tiger’s whiskers or the whuff of blood-scented breath on their face than they can with Park in his part memoir, part researched study.

Park does his best to live undetected amongst the Siberian tigers—if they notice a scent, a movement, a single noise out of place with their habitat, they could kill him or flee the area—and in the process he submerges his own ego, experiencing solitary confinement, recognizing the need for companionship among other human beings, and nearly going mad in the process of his quest.

Park’s prose is as breathtaking as the photographs included; he is the Neruda of nonfiction. The world around disappears as Park paints the setting, from the trees surrounding him to the flowers and wildlife, as well as the sounds—the birds and water, the wind and rain. The seasons change and like a click in a viewfinder, so does the scene. Readers will have a difficult time putting down Great Soul of Siberia for anything short of an emergency.

This book will be most appreciated by older readers, but the narrative is certainly accessible to well-read high school students. Great Soul of Siberia would make an excellent biology reader as well—a fantastic example of literary nonfiction, of science and field research combined with beautiful narrative to make a compelling account that will raise awareness of the Siberian tiger’s current plight.