The Great Persuasion: Reinventing Free Markets Since the Depression 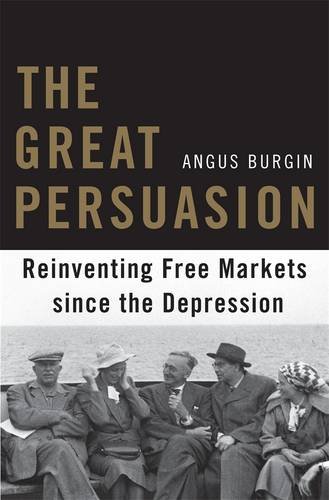 “Mr. Burgin insists that the free-market era has still not ended, despite the market meltdown . . . Capitalism survives.”

The free-market reformation is now entering its maturity. Its most august figures are nearly all dead, and their disciples find themselves rattling around institutions that seem too large for them.

The heroic tales of how the great men triumphed over ignorance and cant have been told and retold until they are worn to the nubs. The canon has been populated.

And now come the historians, sifting through the archives, reading the letters, untangling the disputes.

How did Friedrich Hayek, Ludwig von Mises, Lionel Robbins, Milton Friedman and the rest of the free-market rump convince a world besotted by John Maynard Keynes that big government, in the immortal words of Ronald Reagan, was the problem, and that markets were best when unsullied by the grimy touch of the state?

Elucidating that ascendancy is the task undertaken by Johns Hopkins University historian Angus Burgin in The Great Persuasion: Reinventing Free Markets Since the Depression. The book began as a dissertation at Harvard, and has all the requisite apparatus, including 60 pages of end notes. It’s a book that reads longer than its 226 pages.

Mr. Burgin is an intellectual historian, and his dense, detailed look at the rise and triumph of free-market thought from roughly the 1930s to the 1970s takes a clinical approach to ideology; it lacks both the heavy breathing of a true believer or the snorting disdain of a critic.

Mr. Burgin never reveals whether he personally thinks Mises, Hayek, or Friedman were intellectually right or wrong (Mises, he insists, was tactically a little rigid and extreme). Instead, he focuses on how they built (or failed to build) relationships, networks, and institutions; how they funded and organized projects like the Mount Pelerin Society, which lies at the heart of his story; and how personality, ideas, even geography drew confederates closer together, then blew them apart.

Mr. Burgin is a quiet connoisseur of the ironic shift, the subtle change in ideas under new conditions, the intellectual difference exposing larger conflicts.

“The narrative of the Mount Pelerin Society,” he sums up with characteristic nuance in the introduction, “is one of interrelated failure and success. Its members established for themselves an extraordinarily ambitious philosophical program that they proved unable to achieve. What began as a grand gesture of unity soon broke apart into factions with differences that its internal dialogues served to exacerbate rather than resolve. At the same time, the society’s attempts to rehabilitate free markets in the public sphere yielded, in part through the concerted actions of its members, spectacular results.”

The Great Persuasion is an academic text, which is not a criticism. This isn’t necessarily the book to start with for those who want a general flavor of, say, Hayek, the Austrian-born economist who went on to spend important stretches of his career at two hotbeds of reaction against government intervention in economic matters, the London School of Economics in the 30s, and the University of Chicago after World War II. Those readers might instead dip into Nicholas Wapshott’s breezier narrative of the debate between Keynes and Hayek in the 30s, Keynes Hayek: The Clash That Defined Modern Economics.

Mr. Burgin offers up a more advanced text that digs more deeply. He understands and outlines the often complex interplay of ideas in rarefied academic centers, how ideas cross-fertilize and mutate as generations pass and conditions change.

This book would be valuable if only for his careful dissection of ideas by mostly forgotten Chicago economists like Jacob Viner and Frank Knight in the decades before Friedman.

Mr. Burgin’s main story begins with Hayek and ends with Friedman. He effectively captures the interplay in 30s Britain between Keynes and his Cambridge University acolytes, calling for a larger role for the state in combating a deficiency in aggregate demand during the slump, and a small band of critics at the London School of Economics.

At the LSE, Lionel Robbins was the center of a group arguing that the depression arose from interventions by the state. These ideas closely aligned with the Austrian gospel preached by Mises and Carl Menger and by a rising star, Hayek. Robbins recruited Hayek to the LSE where he engaged in sharp polemics with Keynes and his supporters.

The exigencies of the Depression and war, however, spawned the necessity for a larger role for the state and paved the way for a broad acceptance of Keynesian policies, particularly after publication of Keynes’ General Theory of Employment, Interest and Money in 1936, and, during the Cold War, a widespread approval of communist collectivization, particularly in Europe.

Robbins eventually came around to Keynes and even Hayek, who found himself isolated and derided, and who, when “faced with professional and political irrelevance,” Mr. Burgin writes, “decided that the time had come to for him to begin to elaborate his own positive vision.”

Hayek drifted from technical economics and into political philosophy, producing in 1943 his surprisingly popular The Road to Serfdom, which warned of the dangers of Socialist planning. The success of that book vaulted Hayek, particularly in America, to semi-celebrity status, and launched him on his role as center of a group, drawing both from Chicago (where he soon settled) and Europe, seeking to restore elements of 19th century liberalism—hence the phrase, much debated over the years, the new liberalism, or neoliberalism.

Hayek proselytized for free markets through writing, lecturing and what we now call networking. In 1947 he brought together a now-famous group of like minded souls from both the U.S. and Europe to discuss these ideas at a resort at Mount Pelerin in Switzerland. Thus launched the Mount Pelerin Society, which was at the heart of the “liberal” revival and continues today.

Mr. Burgin has extensively mined the archives of the society and reveals the backstory to that founding. In 1937, columnist Walter Lippmann, who adopted some of Hayek’s free-market ideas in reaction to the New Deal and Soviet communism, published The Good Society. Lippmann was an influential convert, and Hayek organized a group to discuss the book, which met in Paris in August 1938.

The war then intervened. A decade later, Hayek assembled Mount Pelerin around that core group of 26, though without Lippmann, who by then had abandoned many of the ideas in The Good Society.

This is all valuable historically, if sometimes slow going. Mr. Burgin offers intellectual biographies of many of the key members of Mount Pelerin, from the society’s contentious early administrator Albert Hunold to luminaries such as Karl Popper, Michael Oakeshott, Michael Polanyi, and George Stigler.

Over the years, as the society grew, it suffered the perils of popularity. The group, never monolithic, splintered as new voices making new demands were heard. Getting the funds to put on the meetings was always difficult. Tensions surfaced between Hayek, who favored open debate and a toleration of points of view, and members including Mises, who argued for a more ideological allegiance. Conflict and purges follow.

Out of this turmoil emerged a new power in the form of Friedman, who brought new ideas, new talents—particularly for public advocacy–and a new, more policy-oriented approach.

Friedman grew increasingly active in politics, advising Barry Goldwater in 1964 and then, more famously, Ronald Reagan. He was the leading “neoliberal” in the 70s and the 80s when the dominance of Keynesian orthodoxy was dealt a serious, if not quite fatal, blow—much of it inflicted by Friedman and his Chicago colleagues. Mr. Burgin’s description of Friedman’s maneuverings in those years is careful, precise and fascinating.

What do we learn from all this? Certainly not enough to predict the rise of the “next” movement. Mr. Burgin insists that the free-market era has still not ended, despite the market meltdown, pointing out a general consensus on positions once considered outré, from free markets to the benefits of “competition and choice.”

He reiterates the belief, shared by Keynes and Hayek, that ideas often have long underground lives, only to burst into view under the right conditions and the proper care. But Mr. Burgin begs the question: Not that 2008 represents an end to laissez faire, but whether a new Hayek or a new Keynes is preparing a new challenge to consensus and beginning the process of building a new paradigm and a new persuasion.