The Great Mistake: A novel 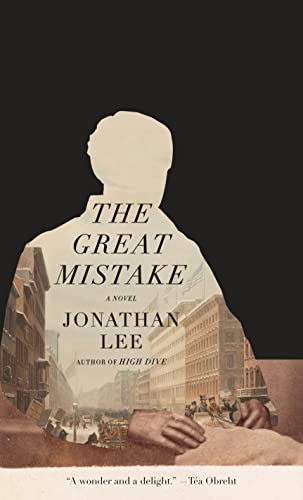 Jonathan Lee’s fourth novel, The Great Mistake, opens in slyly reportorial fashion, queuing up both a dense biographical backstory and a baffling murder: “The last attempt on the life of Andrew Haswell Green took place on Park Avenue in 1903.” The actual Green was the so-called “Father of Greater New York,” responsible largely for, among much else, Central Park, the Metropolitan Museum of Art, and the city’s borough consolidation, this last derided by some at the time as “The Great Mistake of 1898.” And while Green’s killing at 83 turns out itself to be something of a great mistake, the actual mystery Lee traces isn’t so much the ostensible whodunnit as how Green transmuted his private renunciations into such outsized accomplishment.

The Great Mistake remains more strictly within the limits of historical fiction as well as more frequently within the soul of its doomed protagonist, something of a daring move for a writer as skilled at dramatic illumination as Lee. Daring, too, is that Lee chooses to turn most of his light on Green’s formative years rather than his later triumphs.

Green’s father was a Massachusetts farmer whose alcoholism worsened an abusive violence and who, upon learning of 14-year-old Andrew’s attractions to a male friend, shipped him off to Manhattan to apprentice with a merchant.

In Lee’s telling, estrangement from his father only advanced many of Green’s private longings: for confirmation, for order, for approval. When, a few years later, Green spent a year in Trinidad helping to manage a sugar plantation and recognized his discomfort with the privileges of wealth and position, his future calling—a creator of well-ordered public spaces—began to cohere.

Green’s prospects were aided mightily by Samuel Tilden, a young lawyer when he and Green met and, eventually, the governor of New York and loser to Rutherford Hayes in the much-disputed Presidential election of 1876.

He was also Green’s “special” or “intimate” friend, as Lee phrases it, though the two men understood that acknowledgement of the actual nature of their relationship would mean the sacrifice of their civic contributions. Suppression afforded achievement—and, in Green’s case, the latter offered a measure of consolation. “Might our private loneliness, our most crushing inner fears, push us outward, at times, into greater public good?” Green muses. “The building of bridges, of open spaces, of consolidated places where others might feel less alone?”

This need to restrain his true inclinations in the name of accomplishment becomes the dominant chord of Green’s life, and Lee lingers over Green’s mulling of this inner tension. The young Green’s love of solitude, his interest in art and literature, his appreciation of natural beauty—all play out as part of an education for the projects ahead. Eventually, and in tandem with the snowballing public success, is the frustration of his private life, all ceding to his murder in, absurdly, a case of mistaken identity.

This final error brings uneasy closure to a life defined by what remained unrealized. In relatively unadorned and occasionally ironically distanced style, Lee considers the ancillaries of Green’s death: his oddly detached housekeeper of several decades, the local brothel owner who may have been the richest black woman in America, the inspector whose career is defined by confrontation with a rampaging elephant, the vengeful, broken-hearted murderer who was assiduous in everything save confirming the identity of his victim. All confirm the impression in The Great Mistake of the perpetuation of uncertainty. It’s possible to think Green himself, no stranger to obfuscation, might have been amused by the aftermath—the mistake—of his killing.

Lee’s book, in its muted speculations, voices the truths Green felt compelled to silence, though fans of Lee’s earlier works may find themselves wistful over the quieter tone. The subdued tenacity Green cultivates in realizing his vision holds the story together. “You become distant from everybody,” Green observes as he considers the success of his professional efforts, “especially yourself, even if, in the secrecy of your heart, you feel mostly unchanged.”