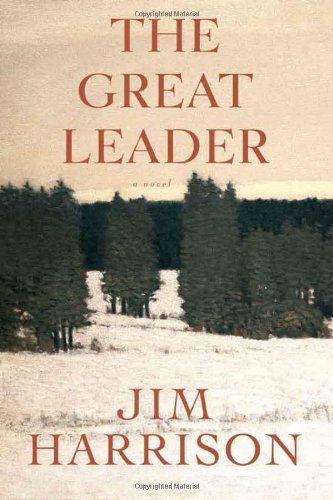 “Mr. Harrison writes of the higher truths that he not only sees, but also lives. He might be a called the Philosopher King of earth—and so might his protagonist, Sunderson. . . . All of Mr. Harrison’s works express the truth as he knows it, and he really doesn’t care a hoot about what others think of his opinions. . . . The Great Leader is some of Jim Harrison’s best work.”

Once again, Jim Harrison has written a book, The Great Leader, that proves he is one of America’s greatest authors, cherished worldwide. Although he has been compared with other writers, especially Faulkner and Hemingway, he writes in his own unique style.

He reaches into the human soul as deep as Faulkner, but his work isn’t as dark; his perception of earth and world and acceptances of differences softens any darkness in The Great Leader. Mr. Harrison is as careful as Hemingway to eschew unnecessary words and overly elegant vocabulary, but perhaps he better at understanding people in the whirl of human behavior and its connection with the world.

The Great Leader, the newest of his 30+ novels, nicely exemplifies what might be termed, “his gutsy grace.” The Great Leader is basically a detective story: Sunderson, a retired detective, chases an evangelist who preys on underage girls. But with the exception of a vivid, but brief, scene of a ferocious stoning, there is little action until the end, and that scene covers less than a page.

But Mr. Harrison has no need to rely on chases and fights because the significant action in the novel is clear in the author’s own mind and therefore in Sunderson’s mind, too. The action is always restless and seeking, directly affecting how Sunderson lives. Although not strictly autobiographical, Mr. Harrison stands with Sunderson in The Great Leader as he does with most of his male protagonists in his other novels.

I live in Mr. Harrison’s beloved area of Michigan, the rural and rough Upper Peninsula, so I admire his accuracy in capturing the area’s soul as well as the depth of his sorrow and disgust at the mistreatment of the Upper Peninsula’s natural beauty. I’ve met Mr. Harrison several times at book signings, first with his early books some 30 years ago. As Mr. Harrison’s reputation grew over the years, I saw his strong devotion to the search for life’s meaning in both his own life and in that of his protagonists. Mr. Harrison writes what he feels and what he knows, and he knows a great deal.

So it is with Sunderson. For example, the detective might express an enlightened opinion focused on anthropology, botany, politics, climate, fishing, or sex, and then back up the opinion with logic, detail, and the story itself.

The author’s vast knowledge of the earth and of human behavior sometimes catches the reader off balance, making us ponder the subject at hand . With economical, often perfect word choice, and poetic rhythm, this author shows what is meaningful to him, and therefore critical to his work. Mr. Harrison writes of the higher truths that he not only sees, but also lives. He might be a called the Philosopher King of earth—and so might his protagonist, Sunderson.

As a young author with an unruly mop of dark hair that I met signing his first novel, Wolf, in 1981, Mr. Harrison showed great talent; this talent has grown and matured over the years, but as a writer or through his characters, he has not strayed from his search of what is right. No matter what others may think about his (and his character’s) rustic life, often in America’s wilderness, and his informed opinions, his gargantuan appetites for food and beverages, especially wine, Mr. Harrison and Sunderson are steadfast in their views. His protagonists struggle to cut through confusion and are keenly aware of where they are in life, constantly evaluating stewardship of environment, government ethics, education, social institutions, war, and peace.

Throughout The Great Leader, Jim Harrison retains the bright clarity of his relationships with these elements, and his connections are not only heartfelt, but through his writing they evoke physical sensations.

The relationships between and among characters in The Great Leader are clear and also fresh. They may be based on sex or based on camaraderie or based on intellect, but they are true friendships among the “good guys.”

For instance, Sunderson’s sidekick is Mona, a 16-year-old Michigan neighbor and computer whiz, who sends him computer generated research needed in his search through the southwest for the pedophile evangelist. When Sunderson is home in Michigan, and with Mona’s understanding and encouragement, Sunderson becomes a regular peeping tom, looking though his window and into Mona’s. Understanding that she is only 16 and he would not seduce her or violate her in any other way, she enthusiastically performs and enjoys performing sexy “shows” for him.

These passages are very funny, but they are decent in spirit. All of Mr. Harrison’s works express the truth as he knows it, and he really doesn’t care a hoot about what others think of his opinions.