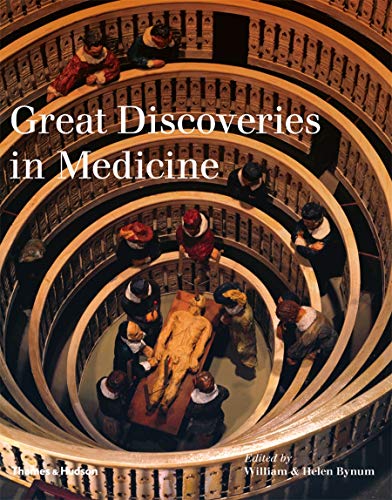 “This book is recommended to anyone involved in health care—from student to practitioner to teacher or administrator—to remind us all of the traditions that nurture and feed us. Laypersons, too, will be intrigued as they dip into these delightful essays and study the accompanying illustrations.”

Healing has been a respected art from ancient times. The desire to relieve suffering and restore well-being has led to observation and experimentation, leaps of insight, public campaigns, pronouncements of folk wisdom, slow changes in practices of hygiene, and technologies developed in pursuit of profit.

Through it all, and despite the occasional appearance of charlatans and self-promoters, medicine has retained in the public mind an air of noble dedication. That nobility, along with human fascination with illness and death, has always attracted attention from artists and writers, and they in turn have created a rich repository of works for the medical historian to mine.

Great Discoveries in Medicine draws on this rich tradition of medical striving and illustration. Seventy beautifully illustrated, short essays explore topics from Egyptian medicine to hip replacement. Each essay is about 1,000 words long and is accompanied by around six illustrations. The artwork ranges from photographs of ancient artifacts to paintings, etchings, posters, and scientific drawings. And unlike so many books that feature rich illustration, this book is a delight to read—not all at one sitting, but one or two essays at a time, and in no particular order.

Editors Helen and William Bynum are respected academics in the history of medicine, and they have managed to draw on a range of experts for these 70 essays. Moreover, they have successfully managed these contributors so that, with few exceptions, the essays display the same thoughtful tone of matter-of-fact storytelling in language perfectly intelligible to an educated layperson.

Early chapters describe the great traditions of medicine in Egypt, China, India, ancient Greece, and the world of Islam. The historic overview then jumps to a number of game-changing advances, from dissection to cell theory and elucidating the structure of organic molecules.

Next comes a section on how we have learned to understand pathophysiology, or what goes wrong in what body systems: this section discusses circulation of the blood, germs, parasites, madness, hormones, immunology and cancer. Given the brevity of the chapter essays, each of these huge topics is covered in a way more suggestive than comprehensive.

The next section, titled Tools of the Trade, presents some of the technology of medicine, from stethoscopes and syringes to defibrillators, endoscopes, and surgical robots. There follows a section on humankind’s great infectious enemies, from plague and puerperal fever to polio and HIV. The essays enlighten the reader on how simple handwashing saved thousands of mothers and why polio is so much harder to eradicate than smallpox.

Surgical advances, from anesthesia to transplant surgery, come next, followed by a final section on specific medical triumphs. On the whole, the editors have done a good job of selecting these, including public health advances such as vaccination, vitamins, and antismoking campaigns along with technical advances such as dialysis and invitro fertilization.

The illustrations provide much of the delight of these chapters. A medieval woodcut of bladder surgery or an Indian miniature of ancient cataract surgery shares space with public health posters and photomicrographs of cells or drugs in crystalline form. Nonetheless, the essays, too, brief as they are, offer new tidbits of information of which even the practicing physician may be unaware.

My one criticism of the essays is that they tend to present a one-sided, rosy view of almost every topic. There is no discussion, for example, of whether a scientific basis exists for ancient humoral theories. Complementary medicine is presented with very little examination of its effectiveness. And a chapter on the breakthrough asthma drug Ventolin (salbutamol) fails to mention ongoing concerns that use of drugs of its class is still associated with an increase in asthma deaths among its users.

Perhaps such concerns are unfair. After all, Great Discoveries in Medicine is meant as a celebration of the diverse and ingenious ways we have developed to fight disease and restore health. This book is recommended to anyone involved in health care—from student to practitioner to teacher or administrator—to remind us all of the traditions that nurture and feed us. Laypersons, too, will be intrigued as they dip into these delightful essays and study the accompanying illustrations.