The Great Baseball Revolt: The Rise and Fall of the 1890 Players League 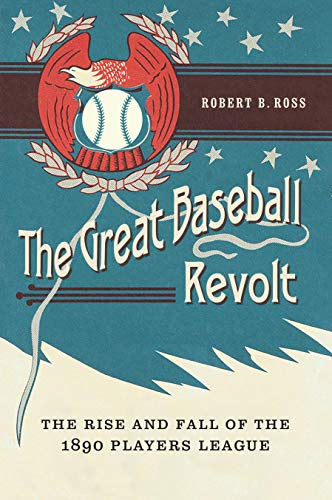 Writing about sports, in particular about the historical pathways of baseball, is a favorite pastime of academics. Few teach or write full-time in the sports field, but given the opportunity to explore the games on and off the field and the society they mirror these scholars find the pursuit of their athletic passions to be irresistible.

Bookstores, libraries, and online services overflow with the literature of sports. Some of these efforts fall into the “gee whiz” category of books about idolized superstars. Members of the academic cohort use the perspectives of their home disciplines to advance our understanding of the games we love.

Robert B. Ross, an associate professor of global cultural studies at Point Park University in Pittsburgh, brings his multidisciplinary skills to the history of an important, and often overlooked, event in baseball history.

In 1890, the best baseball players in the country bolted from the established National League to form their own circuit, the Players League. Ross places the events that led to the formation of the rival league and its eventual demise in the context of a time when the unionization of the economy was growing, but the subjugation of the working classes remained well entrenched. Ross normally writes about “cultural production” and his training is in geography, not the most common background for a baseball historian. His version of what he terms the “baseball revolt” is a welcome addition to the abundant literature on the National Pastime.

The hero of Ross’s tale is John Montgomery Ward, a splendid pitcher and infielder of Hall of Fame caliber, as well as a graduate of Columbia Law School that he attended while playing for the New York Mutuals baseball club. Ward founded and led the Brotherhood, the first union in professional sports.

The owners of the eight clubs of the National League found that sports entertainment could be made profitable by minimizing personnel costs through collusive arrangements that prevented players from “revolving” from club to club in search of  increased pay. The owners, who called themselves “magnates,” created the “reserve system” which bound each player to his club and prohibited other clubs from engaging in free market bidding for playing talent. As a result, players were paid just enough to keep them playing baseball. It is not surprising that some players engaged in game-fixing—what was called “hippodroming”—to supplement their earnings.

John Ward led an effort to redress the social and economic conditions faced by the players. He sought discussions—they would never reach the status of negotiations—with the club owners. The Brotherhood, however, was shut out in this effort; the owners only tightened their financial grip on the men who played the game.

Ultimately, Ward recognized that it would be necessary to pursue an alternate path to achieve respect, autonomy, and ultimately financial reward. The players would have to take control of the means of production by creating their own league—the Players League.

Although players invested their savings in their own project, the rebellious troops needed financial backers with deeper pockets to make the Players League operate. The circuit required new stadiums for eight clubs and a sound budget to insure that the players would be paid.

For many entrepreneurs, the Players League seemed a sure winner. Players and backers would share the profits and governance of the League. As the only professional sport enterprise with the enthusiastic support of the finest “ballists” in the nation, the new Players League venture could not fail . . . but it did. As Ross explains, it was these financial backers who would ultimately betray the Players League.

The clubs of the established National League fought hard to keep their best players in the fold by offering competitive salaries, but the Players League harvested the bumper crop of these talented athletes. Eighty players jumped, filling most available roster spots. (Each club only had 14 players, at most.) The National League sued these turncoats based on the reserve provisions of their individual player contracts, but courts refused to enforce these boilerplate restrictions.

The Players League was a great success on the field. Home to the best players, the new circuit attracted larger crowds and favorable reports in the sporting press. Nonetheless, almost all baseball clubs in both the National and Players Leagues suffered financial losses for the 1890 season, and that would ultimately result in secret talks between the Players League financial backers and the magnates of the National League in an effort to dismantle the Players League. As a result of what John Ward termed “stupidity, avarice and treachery,” the experiment in self-governance would fail.

Ross’s book offers details not generally known about the Players League, including the identity of the backers and their financial interests. Regretfully, he does not explain what later happened to the players who participated in the remarkable undertaking. (Most were welcomed back to the National League, including John Ward, but at reduced salaries.) Ross could have offered insight into what the failed Players League effort showed about the prospects for cooperative ventures between business and labor in America.

Nonetheless, his book makes a substantial contribution to our understanding of the early days of the business of baseball and why player unions would have to become more traditional labor organizations if they were to successfully share in the wealth their efforts created.