The Great Animal Orchestra: Finding the Origins of Music in the World’s Wildest Places 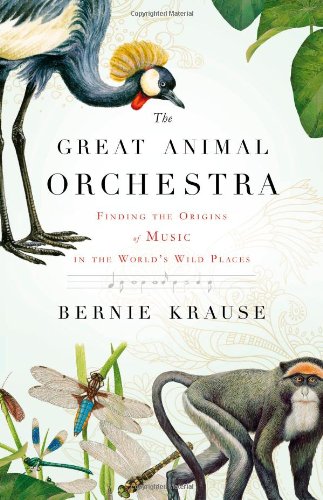 “The Great Animal Orchestra is an interesting look at how we, as humans, define music. Are we musical because the environments surrounding us are? Or do we define the sounds in our environments based on our human understanding of music? It is kind of like asking which came first: the chicken or the eighth note.”

Dr. Bernie Krause has a great job. He has spent the better part of his life traveling to remote, exotic locations and interacting with the local population and wildlife. No, he is not a United Nations diplomat or an airline pilot. Bernie Krause records the sounds of nature.

Dr. Krause’s name may initially sound familiar because as a struggling studio musician he was lucky enough to replace Pete Seeger in The Weavers. When the group broke up in the late 1960s, Krause began experimenting with sound, first with electronic sounds (think Moogs or theremins), then with nature. This book chronicles the evolution of his career, the development of his recording techniques and terminology, as well as the decline of the natural environment worldwide.

The Great Animal Orchestra seems to be thematically divided into two informal sections. Initially we learn about the author’s musical background and how he came to love capturing the sounds of the environments, or biophonies. He discusses various recording locations in great detail and the more remote the location, usually the better the story. Truly a world traveler, Dr. Krause seems as at home in the Amazonian jungle or Bornean rainforest as he does in the Grand Canyon.

Dr. Krause is eminently suited for his work. He is detail oriented and exceedingly patient. These personality traits allow him to sit in the bush for hours on end and not disturb the wild life. He learned his lesson early in his career after an alpha male silverback gorilla decided to throw him 15 feet through the air.

These traits, however, can sometimes bog down his writing. Instead of just saying “We heard several different birds” and listing one or two, Dr. Krause feels scientifically inclined to mention all of them.

For example, in describing one particular session in Borneo, the author writes, “. . . the forest was filled with the voices of insects, trogons, forktails, laughing thrushes, kingfishers, barbets, hornbills, mangrove pitas, green magpies. . . .” Without being able to hear the actual recording, as readers, we do not always need such a complete listing.

In the latter part of the book, Dr. Krause discusses the natural events and man-made reasons for the adjustments to and destruction of particular biomes. Since he has been working in the bio-acoustic field for over 40 years, many of the original biophonies he first recorded are now gone, whether due to deforestation, urbanization, or the natural progression of time. It is so sad that a lot of these species and the sounds will never be heard again except in the collected recordings of Bernie Krause.

The Great Animal Orchestra is an interesting look at how we, as humans, define music. Are we musical because the environments surrounding us are? Or do we define the sounds in our environments based on our human understanding of music? It is kind of like asking which came first: the chicken or the eighth note.