Grave Expectations (A Dickens of a Crime) 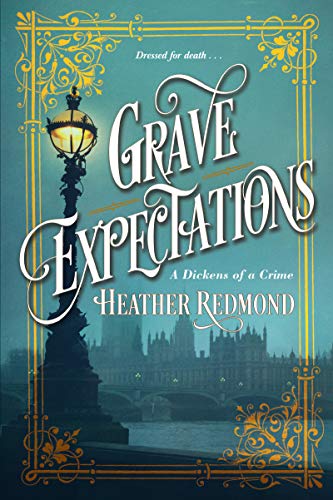 “as easy to read as one of Mr. Dickens’ actual novels and as entertaining. As the subtitle reveals, it’s a Dickens of a tale . . .”

Rooming with his younger brother Fred, Young Charles Dickens is happily settled into his life as a reporter and working hard to save money so he can marry his beloved Kate Hogarth. There may be occasions when money’s a bit tight, but writing lyrics to love songs with downstairs neighbor Breese Gadfly helps out.

When Charles finds an ancient copy of Migrator magazine pushed under his door, he’s puzzled. In it is the story of a Jewish child who was killed by mudlarks, children who scavenged items washed up from the river.

“Such a tragic tale within the damp-marked pages, a tale to make one rue humanity in its depiction of cruel children.”

Charles wonders if one of his neighbors, remembering he said he wanted to write a historical novel, had left it for him.

Soon, the story in the magazine is forgotten as he is asked to check in on Miss Haverstock, another neighbor who hasn’t been seen in a while.

Charles complies, and with Kate, climbs the stairs to Miss Haverstock’s apartment.

What he sees there will one day find its way into the pages of that novel he wishes to write: Miss Haverstock has been murdered, and she’s dressed in a very old-style wedding gown. Since Miss Haverstock was a spinster, that fact adds more mystery to an already gruesome death.

Another neighbor, a blacksmith, is soon arrested for the crime, though his family and all of his acquaintances refuse to believe him guilty. Urged by the others, Charles, with Kate and Fred assisting, agrees to use his newspaperman’s skills in proving their friend innocent.

It’s a most circuitous route, in which that now forgotten magazine story will pay a very important part, giving Charles a plethora of information to solve the case and prove that “the dead never stay dead; they keep haunting you.”

If the title isn’t enough of a warning, as soon as they see the name “Miss Haverstock” and read of the wedding gown, anyone having read Great Expectations will immediately know where this story is heading.

The life of the unfortunate Miss Haverstock may diverge slightly from that of her fictional counterpart Miss Haversham, but it’s easy to imagine Dickens’ imagination later weaving the facts into that famous fiction, his 13th novel. It’s interesting to read along and point out recognizable similarities. Readers will also recognize other characters in this book as the coldly detached Stella, the sympathetic blacksmith, Joe, and the convict-turned-benefactor, Abel Magwitch from the other.

Author Redmond has given their counterparts enough of the original characters’ attributes and idiosyncrasies, without being blatant about it, that they are immediately recognizable.

There is also plenty of mid-19th century atmosphere, from mention of Coldbath Fields Prison, where the unfortunate Daniel Jones is incarcerated to the life of the mudlarks, the group of children living under Blackfriars Bridge.

In view of the usual graphic love life of some fictional characters, readers may find Charles’ courtship of Kate quaint and occasionally amusing, as when he “tickles her cheek with a daring finger,” and in hugging her, “put his arms around her loosely, just in case anyone came upon them.”

Charles also proves himself as good a detective as he is a reporter when he solves the crime.

Grave Expectations is as easy to read as one of Mr. Dickens’ actual novels and as entertaining. As the subtitle reveals, it’s a Dickens of a tale, and readers should be coming back for more.