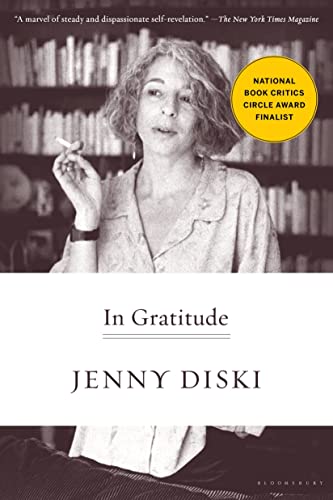 I need a replacement word for fierce. I need something slightly less bloodying than savage and something more devastating than captious. I need a word for Jenny Diski’s undiminished prose in this, her final book, In Gratitude, which is being released in the U.S. just weeks after her death on April 28, 2016, nearly two years after she was diagnosed with inoperable lung cancer.

I need the right word. Don’t have it.

A novelist, essayist, and thinker, a woman who, as a child, was tossed from a dysfunctional home, booted from school, stuck in institutions, and raised (if raised is the word) by Doris Lessing for four ripe teenage years, Diski has kept herself above the fray of insipid, pale prose.

Here, at the end of her life—as she traces that odd and often awful time with Lessing, as she writes about her cancer diagnosis, as she cannot find a word for the machine that zaps her body with radiation or the love she feels for her husband, “The Poet,” as she cannot twist toward any sensible comprehension of the black-out end—she writes scouring, skewering, looping, pristine, stylish, and finally empathizing and empathetic prose. She claws herself straight into the page.

I may be leaving, this book says. But my words are not.

Diski writes with a mental energy one cannot believe she summoned—ever, as a matter of fact, and especially toward the end, with her body thusly compromised:

“So now (start counting) I’ve got pulmonary fibrosis, lung cancer, postural hypotension, pain with any kind of movement—like breathing—from the three broken ribs, and difficulty typing or lifting anything heavier than a small pillow. Next stage down, the steroids I’m taking to prevent inflammation have turned my face ‘cushionoid’ (new bit of technical learning here), which means rounded and fatter at the bottom, a shape my usually long face has never known, and my limbs weak. I’m like one of those secondary characters in a Victorian novel who aren’t long for this world and have to spend the day resting on a chaise-longue taking deep breaths from time to time.”

She writes in circles, starts in the middle, falls back on memories, picks herself up, repurposes scenes we’ve encountered before. Her ideas about things chase her experience of things. She will not be pitied. She will not be called brave. She just wants to get at the heart of things. And how quickly the clock is ticking.

Doris Lessing fans: beware. It’s not often a gracious “adoptive mother” we find in Diski’s telling—Lessing is pugnacious, cold-hearted, self-centered, hardly conscientious in her role as caretaker . . . and yet she financially supports Diski long after Diski leaves the Lessing home.

Nor was Diski herself any box of chocolates. She had, for starters, a look on her face that said “insolent, uncaring, challenging” to those who took the time to see. Diski learned the art of critique, which is to say the art of having an opinion, at the Lessing home. She also learned that the story of her own life will easily be transformed into the material Lessing needed for her Nobel-winning work.

This story—this Lessing-Piski story—is the story of youth, the knot that Piski picks even as the days count forward, the chemo drips, the morphine bottle is at the ready. Piski is nothing if not graphic about the present moment. She wears no false optimism and refuses platitudes. The closest to calm she comes in the face of death is remembering Nabokov’s words about the “brief crack of light between two eternities of darkness.”

Writes Diski, “When I find myself trembling at the prospect of extinction, I can steady myself by thinking of the abyss that I have already experienced. Sometimes I can almost take a kindly, unhurried interest in my own extinction. The not-being that I have already been. I whisper it to myself, like a mantra, or a lullaby.”

We readers are almost consoled.