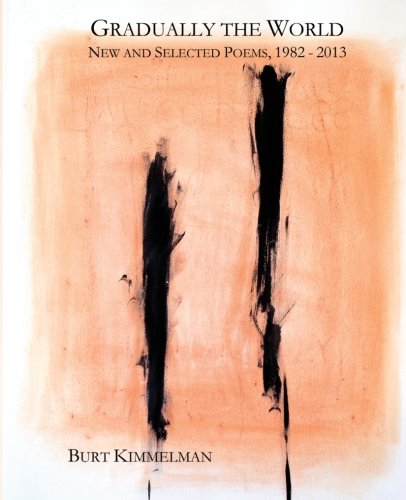 If a Tang Dynasty Chinese poet were reincarnated as a 21st century American poet he might write a poem such as “After the Rain, Autumn” by Burt Kimmelman:

“Blue flowers bow
over the walk
after rain—leaves,
too, have fallen.”

Here Mr. Kimmelman emulates the Lushi verse form with parallel imagery (flowers and leaves) in successive couplets and the same number of words (3) and syllables (4) in each line. Chinese words are monosyllabic, so in a Chinese line of verse the number of words and syllables are the same, and each of is represented by its own character. Most English words are polysyllabic, so Anglophone poets can only approximate Chinese prosody.

Most of the poems Mr. Kimmelman has written since the turn of this century have employed syllabics. Unlike many of his contemporaries who emulate Japanese syllabic forms that vary the number of syllables per line, such as haiku’s 5-7-5, Mr. Kimmelman emulates Chinese verse forms in which each line of a poem has the same number of syllables; at least one of his syllabic poems has only three syllables per line, a few have as many as eight, and most have a number in between.

Basil King, some of whose brushstrokes resemble those of traditional Chinese painters, illustrated this handsome paperback with black and white reproductions of his abstract paintings.

Most of Mr. Kimmelman’s recent poems are syllabic, but not all. His poem “The War Is Over” describes the Occupy Wall Street protests in the autumn of 2011 in 29 metrically irregular lines of between 13 and 16 syllables. He describes the protesters and their signs, recalls an anti-Vietnam War march in 1968 lead by Beat poets Allen Ginsberg and Gregory Corso, and returns to the present tense, concluding:

“I wait for the hundred thousand of us to start marching from
the downtown little park, heading north, cheering and protesting,
and in DC and in all of our cities, and I’ll be there, since now is the time.”

“. . . Anyway,
who was this artist? We see
his paroxysm of labor—the work
is everywhere. When

His use of enjambment in this and many other poems in this laudable book is masterful. They fall into three thematic categories: nature poems, ekphrastic poems describing visual art works, and poems that depict scenes of family life. A few poems describe life cycle ceremonies such as a bar mitzvah or a funeral.

Religious rituals notwithstanding, these are secular poems without mystery: what you see is what you get, or rather what the poet perceives is what the reader gets.

Mr. Kimmelman provides descriptions but often, especially in his more recent poems, does not impose meanings, thus allowing his readers to reach their own conclusions. His poems are much more accessible than those of the postmodern poets he quotes in many of his poems’ epigraphs, but he and they would probably agree that any and all interpretations are valid.

Mr. Kimmelman’s “New Poems, 2011–2013” comprise the first section of the book, followed by selected poems divided into three sections: 1982–1992, 1993–2002, and the final and largest section 2003–2011. The book thus begins and ends with mostly syllabic poems from the past decade sandwiching his earlier poems in between.

Some poems combine thematic categories. “Franz Marc’s The Fate of The Animals 1913/Boston 1991, Seth Kimmelman 1951–1991” begins as an ekphrastic poem with a description of Mr. Marc’s painting,

“Among the dangerous shards
the breathing animal turns,
nervous and bright, and looks
into the dead wind . . .”

but starting with the last word of the second stanza the scene shifts to the home of the poet’s dying brother:

lie on your couch in your
‘living room,’ your useless
spindle legs rest on my
visitor’s lap. What will

become of us all, living
and dead? You say it’s not death’s
mystery but the details
of disaster, the new

illnesses each day, which
overwhelm . . .”

This is no longer a poem about a painting, but the first of Mr. Kimmelman’s poems depicting scenes of family life. The poem concludes,

“Strange enough, there’s no longer
confusion. We speak softly,
brother to brother, now
of all the things we’ll miss.”

Other family themed poems depict scenes of married life, Mr. Kimmelman’s daughter Jane at various stages of childhood, and visits to each of his divorced and aging parents. Parenting changes the nature of memory and mourning. In “Letter to My Dead Brother” Burt tells Seth, “. . . I have a picture/of you holding Jane at six months, holding/her bottle to her mouth. . . .” This review will conclude with that poem’s two final stanzas:

“You never learned how children keep our time.
They don’t know us but our words, our faces
shape a world—and we, as if peering out
from behind it, understand how death forms
love, how the photograph becomes memory.

There is a connection that takes the place of
holding one another. I remember you when
Jane puts her arms around my neck. I feel
her warm breath, the blood coursing along.”