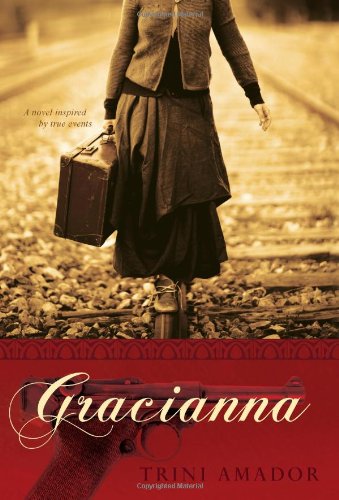 Gracianna is the imagined story of Gracianna Lasaga, author Amador’s great-grandmother, as she sets out from her French-Basque home for Paris on her way to start a new life in America near the beginning of World War II.

When Nazi troops invade Paris, attractive young Gracianna is recruited by the Resistance to seduce and murder select Nazi officers at the Paris restaurant where she works as a waitress. Her sister, Constance, follows her to Paris, is beaten, arrested, and sent to Auschwitz-Birkenau, where she labors in the kitchen for the camp commandant.

Gracianna vows to find a way to liberate her sister from the infamous Nazi death camp.

Ms. Amador proffers surprisingly rich character development. The reader will lock into the personality of Gracianna as she becomes ever more ensconced within life and death struggles.

Debut novelist Trini Amador sparkles as this riveting story unfolds. His characters are deeply endowed with vibrant features and flaws and his evocative descriptions allow readers to experience each environment as though they had been there themselves.

The story is carefully crafted, flowing smoothly and constantly, with impressive purpose and inspiration. More than a tale of good and evil, Gracianna is spun from convincing and memorable scenes and vivid personalities—a compelling and inspiring novel whose chronicle and characters will remain in the reader’s memory.