Governing the World: The Rise and Fall of an Idea, 1815 to the Present 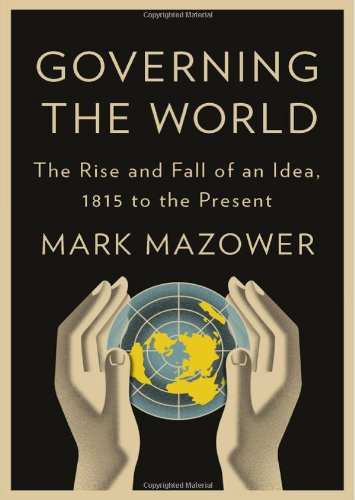 “The book is a slog. . . . You can learn a lot from this book, but it’s like taking bitter medicine.”

“The great European revolution of our time, the revolution that seeks to replace national rivalry by a union of peoples in liberty and diversity, the revolution which would try to enable a new flourishing of our civilization, and a new renaissance, this revolution began with the European Community of Coal and Steel.” —Jean Monnet

Despite the bathos into which that citation plunges at the end, this speech by Jean Monnet, one of the architects of both the League of Nations and the European Union, gives the sense of great mission that those who built international government had.

We did not need a Communist revolution, they said; we needed to replace selfish national striving with international cooperation. Work for mankind, and not for France, Germany, or the U.SA.

This vision has led to some great accomplishments and some absurd idealistic failures. Monnet was a practical bureaucrat who succeeded in making the technical section of the League of Nations work—unity in matters like coal tariffs and transport mattered a lot, and still matter—so it is not surprising that for Monnet, the Great Awakening begins with the Coal and Steel Community.

Yet after World War II, Monnet dedicated his energies for several years to a plan to create a political union between France and the United Kingdom.

As the example of Monnet shows, the vision of a single world government has led men to madness, but also to great achievements. We take for granted the existence of agencies like the World Bank, or the International Monetary Fund, and yet their establishment goes against the grain of much of world history. The role of the United Nations continues to raise fraught questions of debate.

Mark Mazower’s book asks the question: Where did these institutions come from? It then provides a careful, gradual narrative of how the idea of world government and international law took practical form. He traces it from its 19th century roots in European imperialism to the creation of its institutions in the 20th century and their refinement in the 21st century.

Neither the quote above from Jean Monnet nor the anecdote about Franco-British union come from Mr. Mazower’s book. The author’s style is boring at best, truly grim at worst. The book is a slog. With a cast of characters ranging from Mazzini to Kissinger, there are very few citations and characterizations are crude. Occasionally, statements simply do not make sense:

You can learn a lot from this book, but it’s like taking bitter medicine.

The book divides up squarely into two parts, pre- and post-World War II, and Mr. Mazower is far more interested in the latter—part two, Governing the World the American Way, which starts in 1945, runs to about 200 pages, longer than the 188 pages of the first part which covers two centuries.

So the first part of the book sets off at a sprint, devotes a brief look to the Concert of Europe (the movement of reaction that followed Napoleon’s defeat), and fastforwards to Richard Cobden and the creation of the international free trade movement, a kind of precursor of European Union.

Cobden tried to create a tariff union, but the Crimean war, and the colonial land grab in Africa that followed it, put an end to such ideas, outside of the context of Communism, and a kind of democratic religion that the Italian nationalist Mazzini tried to promulgate and one that influenced Woodrow Wilson.

And Mr. Mazower’s extremely sketchy portrait of Mazzini raises questions, particularly as he cites no Italian language sources in his notes. Do our tenured professors no longer read foreign languages?

There is a continued attempt by Mr. Mazower to look forward from the Victorian era to today. I find the logic in these passages of dubious value, but the reader should judge:

“The 1914 British manual of military law noted that ‘the rules of international law apply only to warfare between civilized nations . . . reciprocity was the fundamental condition for inclusion within the ‘empire of law,’ and, in its absence, some argued that anything was permitted . . . this was a trope with a long life ahead of it, especially once airpower became an acknowledged instrument of colonial control. Long before ‘Shock and Awe’ in Iraq, and half a century before CIA officer William Colby pioneered a highly controversial ‘hearts and minds’ program to pacify Vietcong sympathizers, his father, the American counterinsurgency specialist Eldridge Colby, had penned a lucid and revealing essay on ‘How to Fight Savage Tribes,’ that summed up this approach . . .”

A much more satisfactory section describes the international scientific and legal cooperation that emerged at the end of 19th century. But legal cooperation was strictly between fellow Europeans—equally “civilized” nations talked law, and the rest were subject to harsher treatment.

Yet out of this crude imperialist approach emerged the technical and legal cooperation in which Monnet, with the help of Raymond Fosdick (head of the Rockefeller Foundation), and a few other inspired bureaucrats made international cooperation make a practical difference for perhaps the first time. Albert Thomas created the International Labor Organization. Ludwig Rajchman made the League of Nation’s public health section take real action.

Moving into Part II, we find John Rockefeller offering a site to the proposed United Nations along the East River in Manhattan. It took until 1952 to get the whole thing built, meanwhile the General Assembly met in 1948 and voted on the Universal Declaration of Human Rights and the Genocide Convention.

By 1946 American foreign policy under Truman and George F. Kennan had essentially sidelined the U.N. in favor of the Anglo-American special relationship. Truman even terminated the United Nations Relief and Rehabilitation program that had successfully handled aid in Europe.

On the other hand, Dean Rusk cleverly used the U.N. backed up by international law to support U.S. policy in the Korean War.

Mr. Mazower’s book traces the evolution through these policy changes closely, and follows step-by-step as the U.S. deals with European decolonization and the resultant growth in importance of the Third World at the U.N.

Policy wonks will certainly appreciate this narrative, as it is careful, detailed, and seems to omit no important aspect of the issues. He chronicles, with the same care, the rise of the international NGO, and how these have become part and parcel of international law.

The U.S. backed away from most international organizations under President Reagan. But Mr. Mazower describes the emergence of the International Monetary Fund and the World Bank as implementers of U.S. policy.

From all this Mr. Mazower draws strange conclusions. His last chapter is intended to be forward-looking, but is almost entirely incoherent. His verdict on current international institutions is that they are ineffective, although it would be easy to point to any number of examples in which they have been effective. They have not taken over world government, but did we expect them to?

Then it all gets a bit mystical. Mr. Mazower says the primacy of fact is challenged by the Web. Further: “No one now feels the burden of an essential but unknowable future more acutely than the stockbroker and the trader . . . Governing institutions today have lost sight of the principle of politics rooted in the collective values of the res publica.”

The upshot is that it’s all a bit of a mess, since we’re not good citizens of our own countries anymore. What a crude and shortsighted deduction following on the previous documentation and analysis.

The reader should cherrypick what is of unquestioned value in this curious tome, and try to find more on the subject. Perhaps Mr. Mazower will devote his real talents and undeniable erudition to a more serious look at some parts of the subject again.