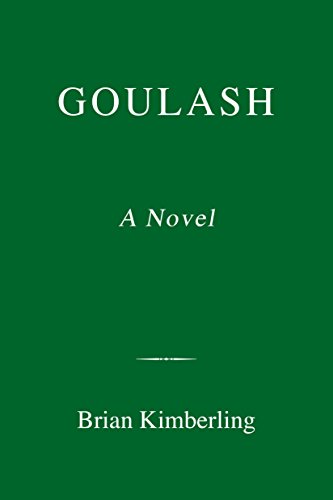 “Goulash is a fun read, but to quote Gertrude Stein, out of context, ‘there’s no there there.’”

Goulash by Brian Kimberling follows in the tradition of “lost generation” or slackers—and-dudes-trying-to-find-themselves-in-Europe-novels that began with Hemingway’s The Sun Also Rises and continues more recently in Arthur Phillips’ Prague (2002) and Keith Gessen’s A Terrible Country (2018). However, Goulash, while amusing, in contrast to its literary forefathers, lacks substance.

Much like A Terrible Country, Goulash is narrated by a clever, wise guy male narrator in his mid twenties who lives in Eastern Europe for a while, works half heartedly, finds a girlfriend, and makes observations about his temporary home in a former Eastern block country. Goulash is narrated by Elliott, whose name appears perhaps twice in the novel and is as unmemorable and un-noteworthy as the narrator himself and many of the characters.

The narrator, an Indiana native in his mid twenties, arrives in Prague in 1998 and lives there for about two years during which time he teaches English intermittently, finds himself a British girlfriend, mingles with various Czech artists and business people, and drinks lots of beer, all the while making snarky observations about his various experiences and encounters.

For instance, Elliott cleverly describes the increasingly Westernized Prague: “It was an era when things available elsewhere were becoming available in Prague, but with distinctly retro presentation. Fresh produce and lingerie both call for decent shop lighting. The department store nearest us, Korva, was an enormous building that suggested a stealth bomber meeting a trash compactor.”

Goulash is organized as a series of basically chronological vignettes or scenes, which highlight an encounter or experience that Elliott has had in Prague. Kimberling’s prose is clean, crisp, and full of sharp one-liners and observations. He wittily describes his apartment: “Sorrowful stories like airborne diseases made their way through the windows and under the doorframe, bubbled up through the bathtub drain. It was possible to fill Graceland with light and color and music and the smell of good food, and yet the flat was like a patient with some untreatable condition, and we got tired of palliative care.”

The novel’s cast of two-dimensional characters which include Amanda, Elliott’s girlfriend, Valerie, an American expat and friend and fling of the narrator, Mr. Cimarron, an artist of sorts, and a few of Elliott’s students are all caricatures who engage in witty, perfectly phrased and timed banter.  While searching for parts of a destroyed monument of Stalin, the narrator and Cimarron exchange clever repartee:

“Ah, but the flood,” he said. “Everything must have been rearranged in there. It will be like panning for gold.”

“Yes the talismanic power of the thing beckons me from here.”

“I won’t need a flashlight because it will glow,” I said.

By the way, Mr. Cimarron is not a native speaker of English.

While Goulash points out or pokes fun at the often-noted growing pains of the post-Soviet era in the Czech Republic and even lightly mocks the narrator’s small hometown in Indiana, it is unclear to what end. Much of the narrator’s observations are amusing but unlike, say, the narrator of Gessen’s A Terrible Country, the narrator learns nothing about himself or the country he’s visiting or contributes any insights about politics, culture, Prague, Eastern Europe, expats, slackers, or much else. Goulash is a fun read, but to quote Gertrude Stein, out of context, “there’s no there there.”