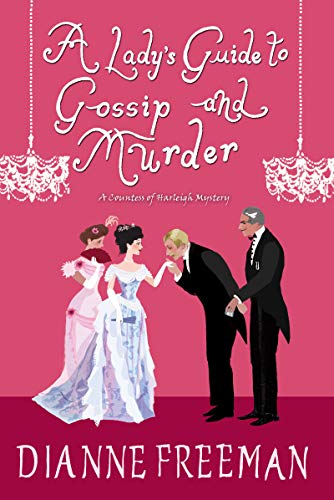 “A Lady’s Guide to Gossip and Murder is a perfect summer read whether on the beach or poolside accompanied by a glass of frosty lemonade.”

She’s back, folks! In the second volume of the Countess Harleigh series, our spunky aristocrat-turned-amateur sleuth returns to solve yet another mystery.

Award-winning author Dianne Freeman takes us back to Victorian England where Frances Wynn, the American-born Countess of Harleigh, can’t help getting involved in scandal and murder. It all begins when a socialite is murdered, and the Countess’s own cousin is the prime suspect. This is a perfect summer read whether on the beach or poolside accompanied by a glass of frosty lemonade.

The socialite in question, Mary Archer, has a secret life as a gossip columnist. When she is found murdered, the countess’s cousin, Charles Evingdon, is taken into questioning by the dogged detective Inspector Delaney of the Metropolitan Police.

The countess, a widow living in London, is drawn into the mystery when Delaney shows her a note containing the complete summary of her bank account. Now, the countess has had a bitter and drawn-out battle regarding finances with her late husband’s family. The countess and her in-laws had not seen eye-to-eye about the family finances. But the countess thought all that was behind her and yet Delaney tells her that Mary Archer had a copy of her bank account summary.

“This was in Mary’s possession? However did she learn of it?”

“You never told her about this dispute?”

“Is there a chance that the earl did, or perhaps his late wife might have done so?”

The countess is not absolutely sure about this . . . ”I should think they’d be even more careful than I to ensure no one heard of it.”

“Would the earl have been careful enough to pay Mrs. Archer for her silence on the matter?”

“Are you suggesting blackmail? I can’t believe Mary would do such a thing.”

Thus begins a story of possible blackmail, secret payouts, murder, and gossip. To solve this mystery, the countess teams up with her handsome neighbor, George Hazelton, and her “little protégée” from New York, Lottie Deaver.

They learn that Mary Archer used servants to gather incriminating and salacious gossip for her columns and has left behind stacks of cryptic notes. Lottie, the countess, and Hazelton sift through the evidence with tireless determination. There are plenty of red herrings and murder suspects. Everyone has a motive and the death of newspaper editor Mr. Norton, along with a missing gossip column, makes the case even more dangerous for our intrepid sleuth. But the countess is not one to give up and you can be sure she finds the murderer, confronts him/her, and justice is finally served.

The reader does not have to be familiar with the first volume in the murder series to enjoy this novel, but it is clear that in the second volume the characters are more seasoned and mature. The romance between the countess and Hazelton is still going strong and Lottie is on her way to finding love with cousin Charles. In this book, all’s well that ends well.