The Gospel of Anarchy: A Novel 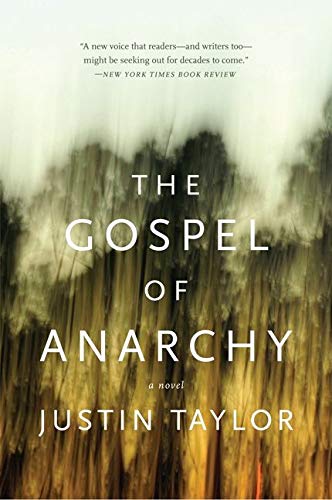 Introductions are made and David is invited back to their house to partake in their newly found feast and to meet the rest of the crew. Upon entering the abode known as Fishgut, David is introduced to a room full of hippies, punks, and social misfits communing in harmonious anarchy as they live and love freely—stealing only what they need.

Getting a short tour, David is given a bit of history about the house and shown the tent that still stands in memoriam of their missing house leader, Parker, who has disappeared; but is expected—however speculative the assumption—to return at anytime. That night, after free booze and a bit of recreational drug use, David is taken into the bed of Liz and her girlfriend Katy, where, ironically, life begins to imitate art—almost as if his computerized obsession had simply been a dress rehearsal.

Of everyone in the house, Katy idolized Parker the most and based on him she has embraced her own style of faith and religion—Christianarchy. A tandem dream with another housemate leads Katy to one of Parker’s hidden notebooks filled with random religious musings; which, ratchets up Katy’s faith from believer to zealot, as she proclaims the notebook a sign and the new house covenant. Like a modern day, Waiting for Godot, Katy prepares for Parker’s return, with David by her side.
Justin Taylor’s debut novel reads with the same flophouse mentality that it’s portraying. Written in an almost stream-of-consciousness, anything-goes style with a plot that doesn’t actually segue, but rather transcends. David, as with most of the characters in the book, is rather aimless, living each day like a real life choose-your-own-adventure storybook.

Devoid of metaphor, Taylor’s words conjure up a sense of foreboding as the story propels forward, each new image and event just seeming to coagulate upon the other, giving an impression of disarray, which, again, personifies the very message it’s relaying.

Though they’re referred to as punks and anarchists, the residents of Fishgut come off as nothing more than street waifs and hippies who have chosen to shrink away from society, along with all its expectations and responsibilities—not to mention personal hygiene. The result feels less like anarchy and more like lazy.

Justin Taylor exposes the fine line between making life choices and living a deluded reality, deftly illustrating how taking things too far or too literally can distort their true meaning and intent.

Through Gospel of Anarchy, Taylor gives a glimpse into that alternate reality often thought of, but rarely attempted: turning on, tuning in, and dropping out.